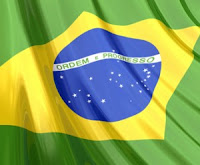 We knew the Indy Racing League officials said Brazil would make it worth it for the IndyCar Series to visit; but this number sounds awesome for the league if it holds up. Via Google translate of Brazilian article:

"For Indy, Ribeirão Preto pay $ 20 million and will have a street circuit"

Its not perfect in translated form, but from the gist of this, it seems they are already talking of making the contract for 6 years with the money amount just the same each year.

"Despite the high value to be paid, the city estimates at $ 100 million that could reach back with proof of Indy Racing League in its streets. Even so, the representatives of Ribeirão Preto already speak of even extend the link (which has not been signed) for six years."

With that money (likely somewhat dispersed to teams as well in sponsorship & travel costs) this race could be even better for the IndyCar Series than a title sponsor. I am curious also of something no one else has thought to ask yet... does this deal include the Indy Lights Series?

Now here's hoping the report is correct... lest we forget how the Chilean reports of Pablo Donoso signing with A.J. Foyt turned out.
Posted by Allen Wedge at 8:05 PM