-Congrats to Daniel Herrington notching up his and his owner’s (Bryan Herta) first victory; the start of a bright future for both I think.

-Not saying Herrington owes him a portion of the winnings, but it might be nice of Daniel to buy James Davison a nice steak dinner for the block party Davison threw behind Herrington once he got the lead.

-He also might want to go have a chat with Mike Potehken who he bumped with no less than 72 times before something on Potekhen’s car finally broke.

-Congrats to J.R. “Captain America” Hildebrand for winning the Lights title and putting on almost a Alex Lloyd-ish type of season in Lights this year!

- Every ting goona be alright!

-The competitive American in me really wishes Team USA (run by AGR) will forego Marco and put “Captain America” in our A1GP car full time this year; I really think he’d give USA a shot at the title.

-Dear media and Versus announcers; we watched live, on-screen, two cars side-by-side, while 1 of the 2 cars was pushing THE BUTTON, and the cars stayed side-by-side with absolutely no visible difference in speed. What more do we need to stop pretending the button produces power of any kind of significance.

- Eeeery ting gonnna be all right!

-Super props to Jon Beekhius and the Versus crew for their piece on the black boxes, and the Power/Philippe crash, and also the piece showing behind the scenes team radio etc from the previous race.

-I have the next great piece for Versus; Not all people have read Dr. Stephen Olvey’s great book, so do a piece showing us what its like to be the Delphi Safety Crew for a race, what they do during a race, what they talk on their radio channel about, how they have to double as clean up crew, and how they sit at ready while we enjoy the action. 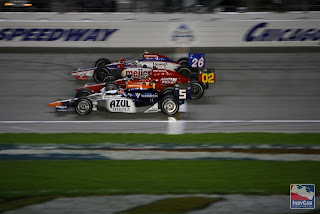 -If I told you after Indianapolis, that I just came back from the future and had a picture from later in the season of Mario Moraes, Graham Rahal and Marco Andretti 3-wide on an oval, during a green flag, and they all came out of it in one piece, you would have told me I was full of crap.

-For the second oval in a row, Ryan Briscoe edged out a car that had THE BUTTON’s remaining while he didn’t.

-Hey Versus announcers, don’t worry if you stop talking about THE BUTTON so much, Every Ting Gonna Be All Right!

- Great job again to the broadcast crew for giving us all the action all over the track, instead of following leaders in line, something that has pained viewers by ESPN/ABC for many years.

-That said, stop showing us spouses at the end of races. If you’re going to show us anything at all, go split screen and instead of spouses give us shots of teams/owners, I want to see what Chip and Roger are doing while their cars are neck and neck.

-Justin Wilson was running as high as 5th, and finished in the Top 10. Dale Coyne wants to know what you think about his “road course specialized” team now.

-The only thing that guts me more than cutting away from a pass is following a guy coasting around on a victory lap only to cut away right before he celebrates with donuts or jumping out the car. Briscoe and especially James Davison pulled some very impressive victory donuts the past few races, and not a single one made the TV screen.

-Dear IZOD, don’t be afraid to plug some of the other apparel you make; I’m interested in non-Indycar clothing too; heck just do a commercial with Hunter-Reay wearing any of your clothing so long as it means a new commercial. Seriously, you can make a new commercial, no worries, Every ting gonna be alright! 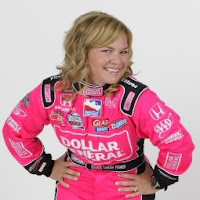 -In what is no doubt the BEST EVER one-off paint scheme, Sarah Fisher and her crew are going pink in Homestead, raising money and awareness for the fight against breast cancer! And if you don’t want the Sarah Fisher specific gear, there is plenty other great awareness apparel with proceeds going to the same fight.

-The ICS owners want to move the start time of the Indy 500 back to where it used to be, which would allow some drivers to do “the double” with NASCAR’s Charlotte race.

-While many whine about how Tony Stewart, John Andretti, Robby Gordon & Sam Hornish Jr would be the only possible gains from “the double” they are all missing the one guy who has been doing a ridiculous amount of doubles in every series he can for the last 2 years, and one who has said he wants a shot at Indy… Kyle Busch.

It'd be nice if they'd call a moratorium on talk about The Button, now that it's been pretty definitively shown that 5 extra horsepower (everybody was full-rich at the end, so a press was only good for 5) is worth maybe, MAYBE a half-carlength over the course of a lap on a mile and a half, and that's taking out effects of other cars. Put two cars side by side, with one hitting the button and the other not, and I defy anybody to tell me which one is which without telemetry. To the unitiated, from the way they all talk about it, it sounds like it's an "automatic pass" button. It's not. Does it help? Sure, but so does getting a good tow, or making the right call in traffic. Give The Button a rest.