My gosh, where have we been? In all honesty there's a ton of blog outlets there now to hit up the initial news and details that we've gotten lazy on you as that's not what we're about here; we're about the small things an analysis and aesthetics.

Speaking of aesthetics, this is one sweet looking logo!

And while many can go on about the detaily details of IZOD as a title sponsor; I'll try it in very short terms, It's f'n good.

More detaily than that you ask? Its a company with a very broad marketing reach already in place, they already throw money around to promote themselves, they already have a relationship and knowledge of the product they are sponsoring, and their product fits perfectly with race car drivers... they have tons of capital, and tons of influence on younger people, which is the one thing this series desperately needs and one thing NASCAR doesn't have... which is why they are desperately grasping for Danica.

I'd love to see driver model some of their clothes at shows, in ads and more; here is a perfect venue: one of the Top 5 most popular (and not because of a bad reason) reality shows; Project Runway. It fits perfectly, have an IZOD rep be a guest judge, and then the task for the designers is to design some pre-race or post-race party clothes for drivers, then have the actual drivers as their models... instant recognition of driver to a new market... and none of it is contrived or pushed. And if you haven't seen the show, disregard this entire paragraph. 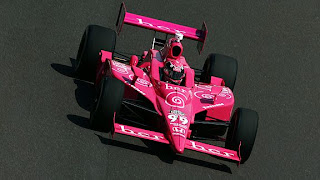 Then we have talk about Ryan Hunter-Reay going to the newly named Andretti team and Mutoh along with Alex Lloyd joining Graham Rahal at Newman-Haas-Lanigan... holy f'n crap are you kidding!? Not only does Ryan Hunter-Reay instantly make Andretti's team more stable and more of a contender and much less of a soap opera, but Lloyd-Rahal-Mutoh is one of the best up and coming based on talent teams I've ever heard. All 3 of those guys exude talent on the track and all 3 are young and have many years to come, that team (if it happens) will be magnificent on the track; not to mention Lloyd's car will likely look amazing.

So then lets talk about one last opportunity before we dive back into the work for our next BIG post...

It is extremely unfortunate, but looking 99% possible that A1GP has finally, for the final time, ended... for real this time. They have canceled their first 3 races and reports are that the staff is all gone and the equipment is up for liquidity now.

Now I say this next part with the realization that I'm talking about human beings who are trying very hard and doing hard work... but that said... while it is sad to see A1GP go, if they are done, I am dead serious and enthusiastic when I say the IRL should waste not a second of time and hire whoever was in charge of A1GP's online streaming and telemetry. 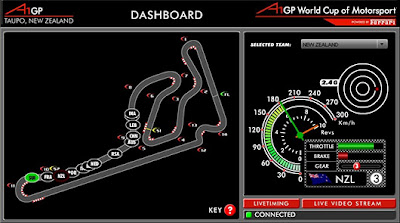 A1GP's stuff was not only flawless, it was amazing and excelled past every other sport and racing series in quality; and it was coming from a series who traveled around the globe for each race. Their video had absolutely no buffering and the telemetry was perfect; it included a live track map/grid, live steering input even down to showing us when the drivers were hitting their boost buttons to G-forces in the car, and I ran all of these things in separate windows for 2 seasons of the series and never had issues with it.

If the IRL could swoop in and purchase the assets and tech team that made A1GP's online product happen and use that for IICS and FILS exactly as it was for A1GP; you would NEVER hear a complaint again about quality, audio, buffering, crashing, non-existing pause/stop buttons, and everything else that continues to plague the IRL website and live options regularly. It is beyond me how the audio was messed up for the Izod announcement yesterday. If this was the first time they were ever doing streaming, sure, but its not and its just not good business to promote the hell out of an announcement to people only to not deliver on it, and its too much of a routine for the IRL right now.

That said, its not a deal-breaking issue for fans, but bringing in the A1GP features to the IRL would go right along with IZOD's commitment to do the title sponsorship the "right way." and putting forth the 'best possible product', not the 'ok we kind of got it done' product.

And with all those thoughts out; I hope to be bringing out the Furious Wedge 2nd Annual, who had the best paint of the season poll this coming week. There were OVER 40 different paint schemes in the 2009 IndyCar Series so that means there's a lot of photos to gather, but it shall be done, and we shall be voting on what looked the best... because really, who cares that Dario won the whole series... but we'll all remember the first time our retinas burned away as Ed Carpenter rolled by.
Posted by Allen Wedge at 12:52 PM

Love the A1GP idea. Those guys are going to be out of work soon I would imagine, if they aren't already.
IndyCar's site has always been a struggle for me, on the odd occasions it does play a live stream it buffers uncontrollably until I'm 5 or 10 minutes behind real time, at which point either it gives up or I do.
The multiple-angle concept is a good one but I do prefer A1's idea of the live map.

You're absolutely spot on about the quality of the A1GP online presence and their live stream. It really was brilliant and light-years ahead of the "Designed by Intern" look and feel of the IndyCar.com site.