Australia has won the One Day International against Pakistan in Perth this evening.

Chasing 213, the Australian's left it until the final moment to score the winning runs, but came through with the goods with 4 balls and 2 outs to spare. Full Scorecard here

Mike ("I wish my girlfriend was a") Hussey scored a clutch 40 in the final overs to guide Australia home, in a game that will be remembered for controversial incident which saw Pakistan captain Shahid Afridi put the ball in his mouth to try and change the condition of it, something about as legal as putting a turbine in your Indycar. 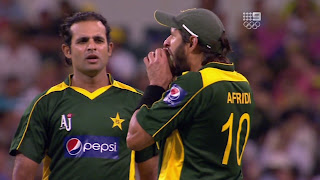 Umpires were forced to change the ball as a result of Afridi's cookie monster impersonation (nom, nom, nom). Afridi is expected to face a sanction from the International Cricket Council as a result of the incident.

The game was also marred by a fieldsman being tackled by a drunken spectator, who will hopefully be flogged in public shortly, because he bloody well deserves it. 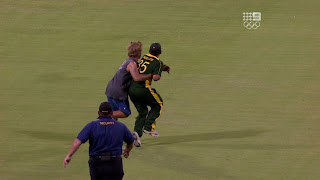 Well, that ends it for my stint on the 24 Heures du Blog. From this point, you're on your own. Back to Daytona while I get some z's before work tomorrow.