Before we had the internet...

I know it's hard to imagine, but think about what it used to be like... to be a sports fan before the internet. Before everyone had super cable and satellite dishes. Before ESPN radio. Before cell phones with mobile updates. I don't know how we survived, but we did, and I have proof.

Today I found a notebook that my dad used in 1987 to keep track of every roster in Major League Baseball. It includes notes for players that were traded, injured, released, etc.

Here are, according to my notebook, the 1987 Chicago Cubs: We basically had three sources to collect this info:

The television part made it easy, especially when it came to the Cubs, Braves, and the other National League teams they played against. But I imagine this must've been difficult for American League teams. Other than the nationally televised game of the week, we didn't get to see a lot of AL action. This information probably came from boxscores and transactions listed in the Times Picayune.

I am not sure what the check marks are for beside the players, but my guess is that it refers to baseball cards we had collected.

The notebook did not have enough pages, so some teams ended up on these "Things to Do Today" sheets that had to be folded into the notebook. For example, here are your 1987 Cleveland Indians: 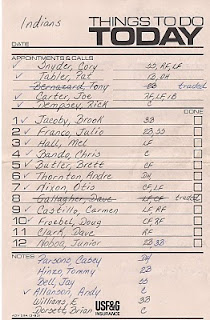 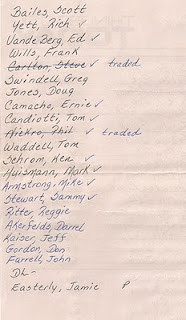 Did the Indians really trade Steve Carlton and Phil Niekro in the same season, while keeping a dude name Sammy Stewart? I guess it's true. A "Things to Do Today" sheet wouldn't lie!
Posted by Mike at 7:59 PM

The best part of Sammy Stewart's career was a 1988 Fleer card where he appears to have been drinking when the photo was taken!
Seriously,Stewart had a few decent years in the Oriole bullpen,but by the time that he hit Cleveland was near the end of the line.

OK, we need to find the card now! My 1988 Fleers are buried in my attic and there's no guarantee I even have it. I'll look around on the internet. If I don't find it, I'll look in my attic and scan it if I have it.

Haha! Check it out: Sammy Stewart

We've got Paul Noce and Davey Martinez all up in the Furious Wedge today! Put it on he calendar as a red letter day!