Continuing the sleuthing that produced yesterday's big collection; I figured it might be nice to add a little cherry on top for anyone interested. First we can start with fun stats and information coming from articles like:


"More than 11 million people pass through the Parque Anhembi annually."


Pretty sweet car they have on display too. But about the track and area, the more you know, the better the location of the track sounds especially know what it is normally used for.


"The Anhembi Park has no limit ... The largest convention center in South America, once again, proves that your only limit is the imagination of its customers.

After receiving parties, concerts, fairs, congresses, automobile testing, among others, will now be transformed into a fast track to be the scene of the opening stage of the Indy Racing League in 2010, internationally renowned race to be held in the city in March 2010. The start will be on the trail of Sambadrome, where will also be mounted to the VIP area and cabins.


The site was chosen by the team of American Tony Cotman, security director of the Indy Racing League (IRL), the promoter of competition in the world, and a member of the International Automobile Federation (FIA), due to the premises of the Anhembi and the possibilities that offers the space, which is considered excellent."


But lets leave the best part for last, here is the actual video Sao Paulo put together and sent in to the IRL to show their drivers and teams over the winter meetings. Its 8 minutes of events, crazy fun, celebrations, amazing stats, sports, food, diversity and itty bitty tiny bikinis:


UPDATE: looks like paving has already made its way to the streets around the circuit. 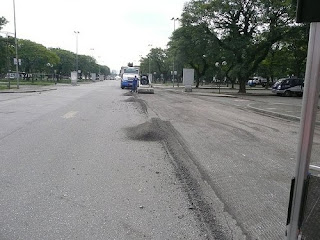 Damn my workplace and its lock on Youtube and other web video hosts!

Another great get, Wedge. Keep this stuff up and you'll be in line for a Web-ulitzer.