Blogathon Bonus! I'm back for the NFL Pro Bowl... 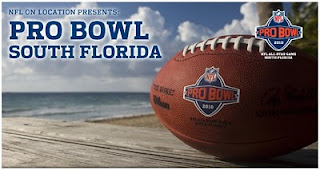 10:02 - So, in reference to our podcast discussion, Favre's not even here but McNabb and Romo are. These rosters are not even close to the originals.

9:35 - That was good. ESPN was interviewing Maurice Jones-Drew and he was supposed to be out on the field for a kick-off. He put on his helmet and ran to the field, but it was too late. Back to the bench.

8:58 - It's the first half and we're already seeing David Garrard?? OK, unless Rodgers and Shaub come back in, I think it's time for me to switch over and check out the Saturday Night Live Sports Special on NBC.

8:30 - Young just threw it abut three yards short on a quick 10-yard pass. Although it could have to do with the fact that the coach in his helmet sounds like Charlie Brown's teacher.

8:28 - No offense, but since Vince Young came into this game, the NFC has taken over. Also, I could listen to Ray Lewis on the field all day. I'm hoping he becomes a head coach someday.

8:00 - I like the audio in the huddle, but would like it more if I could hear Brees and Manning. TD -- Rodgers to Steve Smith.

7:52 - Wow. While I'd still like to see the NFC double-team Andre Johnson to make Shaub a little less comfortable, it probably doesn't really matter. Shaub looks pretty good. This also makes you wonder how good Brandon Marshall would be with Shaub throwing to him regularly.

7:40 - You would think the NFC would make sure to guard the one guy who Matt Shaub is used to throwing to!

7:25 - So the big debate of course is should this game have been moved. Wedge and I discussed this a bit in our first podcast. I really don't think the time or location matters. I love the MLB All-Star Game. I do my best to watch the NBA All-Star Game because I think it's fun. I also watch all of the pre-game festivities and contests for both the MLB and NBA games.

On the other hand, I rarely watch the entire Pro Bowl. Many years I haven't even turned it on. And I think it says a lot that Wedge and I were not the slightest bit worried that we'd be asleep long before this game kicked off.

So I don't think it matters. Before the Super Bowl or after it. In Hawaii or wherever. Doesn't make a difference to me.

7:15 - So yeah, I found out work is canceled tomorrow and I'm still pretty much snowed in. I haven't been to sleep yet because I'm crazy. I figure I might as well stay up and watch the Pro Bowl at this point. If I have any interesting thoughts, I'll post them here.


I still have lots of Blogathon supplies leftover. Party.