I'm feeling a little Brazilian after the last few hours or so.

Why you ask? You see what the super sleuthy investigative team of the Cunha Furiosa (Furious Wedge for the English speakers out there) have found out, is that the 4-minute video circulating around the IndyCar ranks is, in fact, only a small piece of the pie.

That video is actually only a short segment of a longer 30 minute IndyCar special show that was shown in Brazil. And while I don't speak a lick of Portuguese, I can tell you the video is highly encouraging for a race fan. Because without even being able to understand anything beyond driver's names and "IndyCar Series" I learned many things:

A) Probably the most important thing you can garner from the extended video is an extremely better feeling about the circuit. Like many others, I wasn't too happy about the look of the area around this track. The roads' lack of paving (more below) and the Mississippi River looking brown-water-way in the 4-minute video (not exactly the Yahct Club of St. Pete or the shores of Long Beach).

But I am highly encouraged to see that those grandstands and area that will most likely become the front straightway, is in fact, not an abandoned former something-or-other, but it is, in fact, the currently used main center straight for Carnival! (see picture) That doesn't mean its good paving sure, but it means its an area that already accommodates large crowds, and is not a bad part of town, and is popular among the natives. Plus it brings up images of half naked girls dancing around IndyCars in the brain... (sooo tempted to post pictures of Carnival women here)

B) The paving of the circuit has already begun. Now technically the images are not in the video, but this came from some of my other sleuthing around the Brazilian world, but feel free to click on both of the pictures to your right & left for bigger versions and take a look at the ultra smooth paving that is going on for the circuit. From the stuff I'm reading (which includes Enrique Bernoldi getting behind the race saying its good to have more than F-1 and also cheaper than F-1) apparently the biggest worry about trying to get the circuit ready in time is simply bad weather, more specificly rain that might hamper any paving progress, like such.

D) Easily the second biggest thing from the looks of this video, regardless of any knowledge of deals, rumors and likewise; I think we should highly expect to see Ana Beatriz on the IndyCar grid in São Paulo. Firstly because she's just as prominent as Helio Castroneves, Tony Kannan, Vitor Meira, Raphael Matos, Fillipe Giafonne and her own manager Andre Ribero in this video. She's also from São Paulo... but even if that isn't enough for you to think about betting on it; I just happened my way to her site which even in English mode is mostly in Portuguese, but even my crazy eyes can read between these lines:


"After two seasons in Firestone Indy Lights, Ana Beatriz gets ready to debut in the IndyCar Series in 2010, between many activities in Brazil.

In late November, she ran in the International Challenge of the Stars, a kart tournament organized by Felipe Massa in Florianopolis,  contested by drivers from many series, including Michael Schumacher, and almost all Brazilian IndyCar drivers: Tony Kanaan, Vitor Meira, Mario Moraes and Raphael Matos.

In December, between interviews with the Brazilian press and participating in television and radio, Ana Beatriz debuted her column in WebMotors´s website which is the most important site in the Brazilian automotive sector.

From now on she will take care of the preparations for her first race in the IndyCar Series, which will be held on a street circuit in Sao Paulo, her own city, on 14 March 2010." 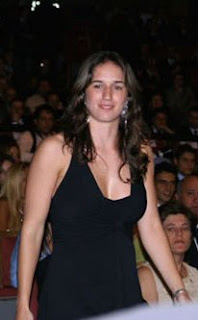 E) Bia Caselato Gomes de Figueiredo (a.k.a. Ana Beatriz) is smoking hot out of her drivers suit. I'm not saying she needs to go all FHM like a certain someone else, but even Mrs. Wedge saw her interview on that video and agrees, rowr, someone get that girl to take some PR photos out of the baggy drivers suit, or at least with her hair not back in racerish-ponytail form. Someone get her on Pressdog!

F) Bruno Junquiera and Mario Moraes are not in that video. Bruno is probably a little expected from his on/off role this past season but it is a little odd that Mario isn't in the video, especially considering he calls São Paulo home. Now it could have been odd timing, he could have been somewhere else at the time, but we do know that he's not yet 100% confirmed at KV Racing for 2010... am I reading too much into this?

UPDATE: As of this morning we now have some official comment from Mario Moraes on the race talking about how much hes looking forward to a race that all his friends/family can attend. So maybe I was making a bit too much of it. He even adds one statement I think we can all agree on for him and look forward to:


"I am excited for next season, because I learned more this year than in my whole career," he said. "I'm evolving and I think a step in Brazil will give even more motivation,"


G) In 30 minutes of video I couldn't understand, I think I learned more about IndyCar racing than I have in the past decade of ABC's race coverage. Seriously that thing was ridiculously loaded with video and pictures from everything, almost every car in the series for 2009 was shown, we saw many shots of IndyCar racing throughout all the years, and even got interviews with other past great Brazilian drivers.

H) We finally get to see Helio, his girlfriend Adriana Henao, and uber-cute baby Makaella! And while you might think that uber-cute babies are not enough; we can always bring it back to racing, and do a little logic here and realize this video was all shot within the last 14 days because Makaella was only born on December 28th.

Of course after all this I know you're clamoring like mad people, and want to see the video... well lucky for you some Brazilian guy has now got it up on the internet in 3 easy parts, I'll let you delve into the Portugese now.

This is great. I don't fully understand it all yet, but I'm wondering why this is not being marketed or promoted more? Why is the Furious Wedge talking about this instead of (or at least in addition to) larger media sources?

This is confusing me.

It's because the Furious Wedge is taking over the mantle of "most reliable source of in-depth sports muckracking" from...well, who had it before? Outside the Lines? Jim Rome? Spider and The Henchman?

Anyway, huge ups to you, Wedge.

I know we're huge in Milwaukee!

There's just one thing I'm wondering about... why is the ICS/IRL/whatever invariably known as "Formula Indy" in Brazil?

Brian, my guess is that it has to do with the saturation of Formula One as the major form of motorspots there.