In light of his upcoming dethroning as the king of Tennis, Roger Federer is preparing for a new career.

In these exclusive picture, you can see him preparing for a likely start in the 2012 Indycar Series in the Delta Wing car. 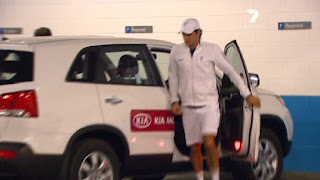 Or maybe he decided to just drive himself to the tennis tonight in a Kia. Who knows.

Meanwhile, in the cricket, Pakistan (7) has slumped to 212 in their innings against Australia to win the one day International in Perth. You have to understand that Pakistan in Cricket are a bit like Mario Moraes. One day surprising you beyond belief with his potential, and just when you give him a pat on the back, he comes back to the garage in something that looks more like a bobsled than an Indycar.

One thing I can tell you about one day cricket in Perth though, is that it's like Indy. If you're under 220, you suck. And Pakistan are about 40 short of what they needed to win this, expect the Aussies in the next 3 hours to eat them for breakfast.