How Was Ski-Cross Not An Olympic Sport Already? 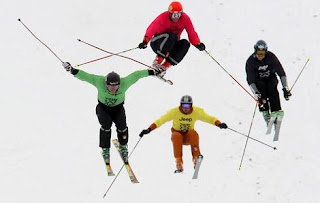 For anyone like me who may be flipping over to the Winter X-Games as many of our Olympic athletes are doing their final warm up, I just have to ask, how in the word were Ski and Snowboard cross not Olympic events before now? this is amazing and of all, its not settled by judging! That had always been my biggest pet peeve about the Winter Olympics because its been so packed full of opinion result controlled sports like figure skating, moguls, ice dancing, snowboard halfpipe; which I'm not going to argue those people aren't athletes, I'm just going to argue that any "sport"; even outside winter Olympics is crap when the result is decided by anyone other than the competitors; find a way to let things be settled so that the fans can immediately know who won, as they say "settle it on the field."

Now its time for some Snowmobile racing! For which we get to hear the great voice of Paul Page!

Graham Bell has said on Ski Sunday, "The only way to make it more exciting would be to include shark infested pools." Yep, says it all.

Also, my word verifications are simple as squat.