Skeeter gets paid money to be thrown off of animals 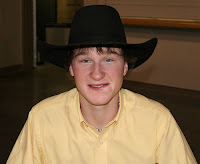 Frustrated with the Vandy/Kentucky game, I am now going to check out the other sports. This guy was riding bulls and his name is Skeeter Kingsolver. They were saying how awesome he is. He is awesome at sitting on an animal and having the animal throw him off within seconds. This bull just chucked him through the air and he got up and was high-fiving fans and stuff. They were all so happy to touch his hand because he was sitting on the animal and then got thrown off quickly.

Don't front. I've been to a couple of PBR events here in Omaha. They're actually pretty entertaining. They're especially entertaining if you're drinking and enjoying tickets you got for free through your wife's office.

Don't remember if Skeeter was in the house, but there were some incredibly entertaining names. A couple of Codys. A Tex, maybe?