So we had a Steroid Era. Now what? 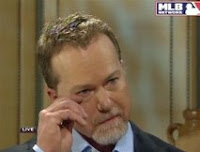 Well, at first I thought we were learning that they were putting steroids into the Big Mac or, even worse, the Big Mac Wrap. I was going to be pissed. Then I realized... nope, this is just a headline for something we all knew already. (I heard there's a breaking story today where we'll all find out that The Beatles did, in fact, have a bunch of hit records.)

So now that we "finally" know the truth, where does that leave us, as sports fans? We already know how I feel about people making mistakes and suffering consequences for actions. Nothing is easy, or it shouldn't be anyway. For instance, if the guys from Tennessee like to possess guns and drugs, then their lives should be inconvenienced. Off the team, out of school. I'm not saying they can never play again or they should even go to jail for a long time. I'm just saying there needs to be a consequence.

So what is a fair consequence here? I really don't know. If they take McGwire's records away or whatever, I'd be fine with that. (You can't erase our memories and you can't burn all that was written at the time. The Summer of '98 will live on, no matter what the record books state.) Asterisks, forfeits, I think any of that is fair if done evenly. But there's your problem.

Do we want to know or not? Mark McGwire is the first player with Hall of Fame numbers to come clean and admit to steroid use BEFORE he was caught. (Right?) We need to be careful how we handle this. Any attempt at a punishment (which would be useless anyway) will prevent us from learning the truth about countless other players from that era. The fact that he is a newly hired hitting coach with the potential to be the best 46-year-old pinch hitter in history may make MLB want to come down on him. But I fear that is the absolute worst thing we could do right now.

Will the voters keep him out of the Hall of Fame? This is likely the consequence we'll see. And again, if that's what is decided (officially or if it's just understood), then fine. He deserves whatever he gets. That's my point.

Personally, I've thought about it. If I had a vote, I would still vote for these guys. McGwire, Sosa, they were clearly the best of their era. Same as Shoeless Joe Jackson and Pete Rose. We saw them do things on the field better than anyone else they were playing against at the time. Baseball had a Steroid Era... you can't just ignore it.

But if I did have a vote, here is what I would do differently. Besides voting in the ones with the obvious Hall of Fame statistics (after maybe analyzing the numbers for a little bit of steroid inflation) I would also vote for the players who stood out in that era and were NOT (and still are not) suspected of using steroids.

My obvious first choice is Mark Grace. In the decade of t

he 1990s, Mark Grace led Major League Baseball in hits (1,754), doubles (364), and sacrifice flies (73). Admittedly, his career totals are not true, traditional Hall of Fame numbers. He lasted 16 years and produced 2,445 hits. But the fact that he was clearly a dominant hitter in the 1990s and was never suspected of taking steroids would earn my vote.

Yes, I'm a Cubs fan. Yes, the only dog I ever owned was named after Gracie. But numbers are numbers. So who else is there? Which other guys from this period are similar: numbers just below traditional Hall of Fame totals, but probably did not take steroids. Should we consider rewarding these guys for the work they did in the Steroid Era?
Posted by Mike at 9:56 AM

Gotta put Grace in there