For those who went through Blogathon with us last year, likely remember that SPEED fought with the TRG team about their "pit cam" a stationary crappy, grainy still shot from TRG's pit. The shot never showed you anything but the pit, no track. SPEED told TRG they could bring it back up when SPEED went off the air for the night... the only problem is that it was a lie, and they forced it to stay off the internet the whole race, even though SPEED themselves were abandoning fans for 9 hours of the race.

So this year after a ton of work TRG managed to finally get SPEED to agree to let them do interviews with their own drivers on a live cam, so long as the shot didn't show anything trackwise... which is why its funny, because their attempt last year didn't show anything as it was. Its been great, we've been getting a lot of great info that isn't on the TV broadcast, plus the fans can directly ask drivers questions right before and after they get in the cars, I've loved it. 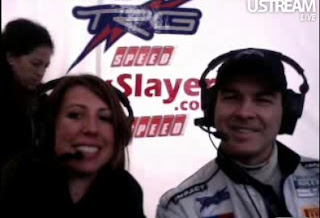 Not content with constantly trying to ruin the fan experience online, while still not doing anything to improve their own TV coverage or website experience, SPEED just stepped it up a notch, by bringing in some weird lady who just showed up and started putting SPEED logos an some stupid tax company logo on TRG's back tent canvas!? Are you kidding SPEED!? What part of TRGs great web-cast did you have a part in, other than being a hardass and taking out the potential for more of what it could have been?

Though to be honest, at least TRG is holding back nothing about what they think about SPEED as Liz, TRG's PR person, who has been on this web-cast the ENTIRE race, may have said it best "I'm not sure what their TV numbers are, but we may actually be competing with them."

In case you missed it, SPEED wants you to know they had nothing to do with all of this and it shows in the fans comments; I'd say this has done about 300 times more damage to them than taking TRG off the air last year did. How not to win over fans and friends... 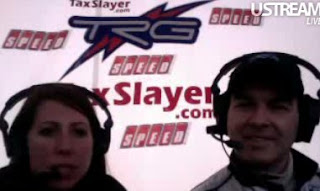 We should've uploaded videos of ourselves talking about our Mario Kart races and pit strategies.

Garbage. Every year during Speedweeks, SpeedTV manages to squander most of a year's worth of goodwill that they build up by allowing Varsha, Hobbs and Matchett near-carte blanche on the F1 telecasts. So stupid.