Stewart Maybe Not so Original

Time for the 2nd Root Beer Review of Blogathon: Stewart'S
(yes the last s is capitalized) 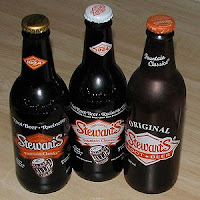 Ok first of all, too many slogans, its got "Since 1924" which does mean its gone a long time, but doesn't always mean its good. Then "Original" then "Fountain Classics" then "Cold Brewerd Draft"  holy cow Stewart, just pick something here. I'd say the same for your brew; its not bad, but it just isn't anything special. I mean yeah I'd drink it if its available, but it sure isn't beating any other root beer I've had to date... well maybe it beats Big Shot... but that's not even fair. At first I was going to say Stewart's is like IBC, but the problem is IBC has a distinct flavor to it... I'd say Stewart's is kind of like the Richie Hearn's career in IndyCar; no one has anything bad to say about it, but it just doesn't have something specific that stands out, which is why I call b.s. on their "Original" motto.

I don't do Stewart's root beer. It's all about the orange and the lime for Stew.