Well, as you may know by now, I enjoy making predictions about big games. But I mean, if I just guess who is going to win, then I am really not providing you with any real service. I feel like when I tell you who is going to win a game, I should have some kind of proof. Something I can offer to make you say, "You know? I can't argue with that." I need a way to realistically evaluate a match-up so I can provide, for you, the name of the team who will be victorious.

When it comes to football video games, it doesn't get much better than Tecmo Super Bowl for NES. So this has become my method for big NFL predictions. (What is my record, anyway?)

Last year's Super Bowl prediction game was an easy one to play. I liked both the Steelers and the Cardinals and played a fun, unbiased game.

This year is different! MY team is in the Super Bowl for the first time ever. I had to approach this game with more focus. Ladies and gentlemen: this was not merely a prediction, but it was also an aid. By winning this game, I knew I could inspire the Saints to repeat in Miami the things I accomplished in Tecmo Land.

And it was a thrashing. Relentless, blood-spurting hits. My guys were locking arms with their guys and tossing them to the ground. One of my guys would hold their player and I would take my man and dive right into them. My receivers jumped 15 feet in the air to cath balls that my quarterback could throw 120 yards, if needed. I watched my running backs touch defenders and cause such violent reactions, causing the opposition to simply roll backwards like bowling balls.

Most importantly, I watched the New Orleans Saints bring home a victory, helping an entire city momentarily forget about 40 years of misery. 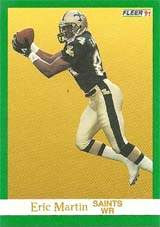 The Saints received the kick and Gil Fenerty took it to the 23. On the first play from scrimmage, Steve Walsh (surely possessed by the spirit of 2010 Drew Brees) lofted a 77-yard touchdown to Eric Martin, who showed he had the hands of Marques Colston and the speed of Devery Henderson. 7-0 Saints.

The Colts managed a 1st down rushing, but the Saints defense, led by the Dome Patrol, set the tone early: no passing. If Peyton Manning himself were playing against me for a pack of Double Stuff Oreos, and controlling Jeff George, I am sure the outcome would've been the same. 0-3 passing on the first drive, quickly resulting in a punt. (Sorry Peyton, I only have one USB controller, so you'll have to bring your own to accept my challenge.)

The Saints went back to work, looking to repeat the Walsh-Martin bomb, but the Colts defense had adjusted. At the bottom of the screen though, was a tight end, streaking down the field. And while I know his name is Hoby Brenner, I swear I saw long, blonde, Jeremy Shockey hair flooding out the helmet, flapping in the wind. He made the 48-yard catch look easy. Craig Ironhead Heyward ran for the 8-yard score, anihilating two Colt defenders with mere touches. 14-0 Saints. 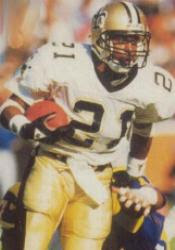 The Colts failed on three more passing attempts and quickly punted the ball back to the Saints.

The Saints scored in three plays: 55-yard pass to Eric Martin, a 20-yard flea flicker to Martin, and then a 12-yard run by Dalton Hilliard. 21-0 Saints.

Indianapolis still could not complete a pass and finished the half with zero completions. New Orleans had enough time for a Hail Mary attempt before the end of the half, but it fell short for the team's first incomplete pass of the game. 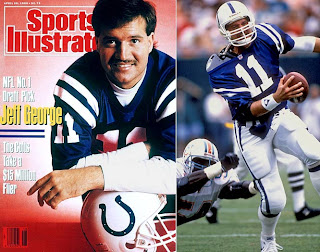 Jeff George started the second half by throwing an interception to Brett Maxie on the first pass. Ironhead took the ball to the endzone on a 29-yard run, taking out three Colt defenders this time. 28-0 Saints.

After a bad onsides kick, the Colts finally put together a scoring drive, with two runs by Albert Bentley and then a 19-yard TD run by Ivy Joe Hunter. The Saints answered with a one-play drive, a 50-yard strike to Brenner. 35-7 Saints.

On the next drive the Colts avoided disaster when George picked up a fumble in his endzone and scrambled for 18 yards. He then completed his first pass of the game, a 20-yard strike to Jessie Hester. But George was intercepted by Robert Massey on the next play.

Following Massey's interception, the Saints once again only needed one play to score when Martin caught a 60-yard bomb. 42-7 Saints. 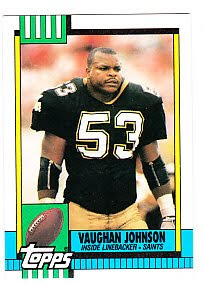 The Colts were lucky again, as LB Vaughan Johnson held Bentley in the endzone before rolling away and watching Bentley scamper for 40 yards. The Saints then sacked George on three straight plays before stopping the Bentley on 4th-and-31.

Taking over at the Colt 28, the Saints gave the ball to Hilliard up the middle on the next three plays, resulting in another TD. 49-7 Saints.

On the final Indianapolis possession, George managed to complete two more passes to Hester, but was sacked on 4th down again, turning the ball over. New Orleans completed a 32-yard screen to Hilliard who then carried it two yards up the middle to score on the final play of the game. 52-7 Saints.

Peyton Manning will be held to three completions. The Saints will dominate by flinging the ball all over the field, 50 yards at a time. Lock it up, guys. This is better than Marty McFly's Sports Almanac.

The New Orleans Saints will win the Super Bowl.

Awesome. How I'd love for this to happen.

Also, this brings back some memories. After missing out on Super Tecmo entirely the first time around ('91-'93 or so), I picked up a used copy in college around 1997. That one cartridge got as much play time as my entire PlayStation collection did through my last two years of college. Good times.

Definitely. I probably played 25 seasons of this game in college ('95-'99) in addition to some great tournaments.

Gil Fenerty is a Jesuit High School of New Orleans product. He holds the all-time kick return yardage and touchdown record at Jesuit.