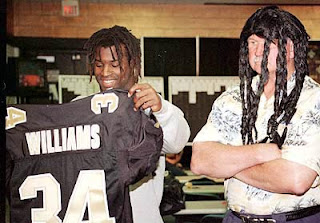 I was in my dorm room, watching the 1999 NFL Draft with so much hope. Like most fans, I had planned to spend the entire weekend watching the events unfold, hoping my team would use the next two days to mold the roster for the future.
Instead, our draft came to an abrupt ending quite early when it was announced that Mike Ditka and the New Orleans Saints drafted Ricky Williams. Before I could open a bag of chips, we had traded our entire 1999 draft and our 1st and 3rd picks for the next year. To get one player.
Sure this was not exactly a "bust." Williams had some good years for us and the fans instantly loved him. (My brother had one of those "We Got Ricky" shirts mentioned in that article and wore it with pride.) At least we didn't trade all of that to Cleveland for Tim Couch!
We went 3-13 that season. After winning the first game, we lost the next seven, including a 21-16 loss to Couch's Browns in Week 8 when he completed a Hail Mary at the end of the game for his team's first win.
It's not that Williams was bad, but the team felt the impact of that move well past that first year. A team that played a combination of Billy Joe and Billy Joe at QB could've drafted Daunte Culpepper. Or they could've drafted Champ Bailey and waited until the 4th round to get Aaron Brooks, who they eventually ended up with anyway. (But then we might not have played Danny Wuerffel at all that year and his playing alone could also make my Top 5 Funny Saints Memories.)
The rest of the 1999 draft could've netted names like Kevin Faulk, Joey Porter, Mike McKenzie and many others. The 3-13 record in '99 would've given us a high enough 2000 pick to grab Lavar Arrington, Jamal Lewis, Plaxico Burress, or Brian Urlacher.
But no. Ditka got to play golf for two days. We got Ricky.