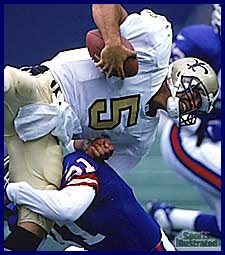 ESPN has named Heath Shuler both one of the biggest "flops" in recent history and one of the largest NFL Draft "busts" of all time. Of course his story includes a stop in New Orleans.

In 1997 we were led to believe that Shuler was going to help the Saints return to our winning ways of the early-90s. (Realize that for the second day in a row, my funny Saints memory involves a Mike Ditka acquisition.) Like always, we had faith in our team.

In 10 games Shuler managed two touchdowns and fourteen interceptions before a foot injury ended his season and career, as he never played in another NFL game. The 3rd overall pick in the 1994 Draft finished his career with 15 TDs and 33 INTs and the Saints ended the season 6-10.

The good news is that Shuler was 4th on the team in rushing (38 yards) and we got good looks at Billy Joe Hobert and Danny Wuerffel. OK, none of that is good news. It was a terrible start for a terrible Ditka era. But it's pretty funny now.

And it seems Shuler is actually good at real estate and politics.