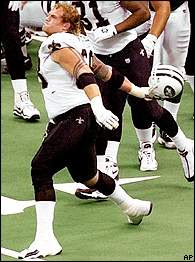 Today was a very busy day, but this one is quick and easy. The summary on Kyle Turley's wikipedia is good enough:

"Turley is widely remembered for what occurred on November 4, 2001 in the Louisiana Superdome. The Saints were trailing the New York Jets 16-9 late in the fourth quarter, but were driving deep into opposition territory. After a scramble, quarterback Aaron Brooks was tackled at the six yard line where Jets defender Damien Robinson viciously grabbed his facemask and started to bend Brooks backwards. Turley proceeded to grab Robinson's hand's and forced him to let go of Brooks, before picking him up by the facemask and tackling him to the ground as referees and players from both teams tried to separate them. Turley emerged from the ensuing scrum with Robinson's helmet and proceeded to fling it across the field before giving an obscene gesture. Robinson and Turley received off-setting personal fouls for the initial incident, but Turley was ejected from the game and assessed an additional personal foul penalty for the obscene gesture, costing the Saints any chance at tying the game. Saints head coach Jim Haslett said he considered cutting Turley following the game but later rescinded his statement after discussing the incident with him and reviewing the game tape. Turley was ultimately fined $25,000 by the Saints Organization for conduct detrimental to the team while Robinson was fined $20,000 by the NFL. Turley said in his defense that he thought Robinson was about to break his quarterback's neck."