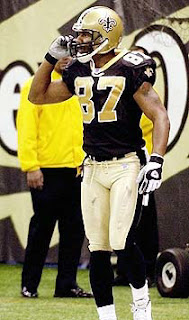 On December 14, 2003, WR Joe Horn had nine catches for 119 yards and four touchdowns in a win over the Giants. While the four touchdowns is a team record (later tied by Reggie Bush), most fans only remember Horn's celebration after his second score when he grabbed a cell phone from the goal post padding and made a phone call.

In these years when our team seemed to constantly finish somewhere between 9-7 and 7-9 every year, most of the fans loved the excitement of shenanigans like these. Let's face it: an average team with some excitement and controversy is much better than the boring, terrible teams we were supporting 20 years before this.

Of course, many purists, including the announcers in this video, disagreed: