Holy Cow: I like the Cubs AND the SOX 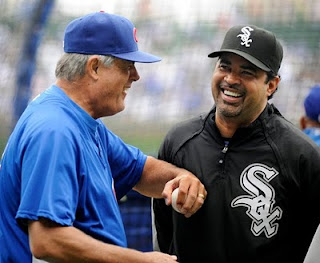 As the snow pours down here in Nashville, I am nonetheless getting excited about the upcoming baseball season! March Madness is great, but it really only serves as a distraction to get me through Spring Training and into the next Cubs season.

The past few years, around this time, I've started listening to 670AM ("The Score") out of Chicago to catch up on the latest Cubs info. Of course, I get to hear a lot about the Bulls and DePaul and, obviously, the White Sox. Having a brother who is a huge Sox fan, I've always kept up with the team anyway. And last night, I admitted that the inevitable has finally happened: I'm actually excited about the upcoming White Sox season as well. At this point, I'd say they're probably my #2 team and my AL favorite.

This is definitely rare and, if you listen to Chicago sports radio, pretty much non-existent in their city. And that makes me feel bad for the people in Chicago.

After just living through the greatest season ever accomplished by a professional sports team in New Orleans, it's really sad to know that Chicago residents will never really witness this. If and when the Cubs ever actually do win another World Series, the city's residents will never know the same kind of joy felt by the people of New Orleans this year. The city of Chicago is too divided. The callers I hear on the radio each night can't stand to even think about the other team having success.

I don't get it at all. They're in two different leagues! Why not look at it as having TWO chances at a title every year? Then during interleague play (or if by some miracle, you get a Windy City World Series!) you can pull for your team, knowing that either way, your city will come out on top.

I guess when it comes to this, my values are rooted in the DIY music scenes that Wedge and I have been a part of for the past 12+ years. In these situations, we're all about seeing each other succeed. And I know sports are not really set-up that way, but I don't see why it can't be. I never felt envy towards my brother when the Sox had success and the Cubs had another miserable season.

I know I'm in the minority here. But think about it. I'd be a pretty miserable sports fan if I only cared about the success of the Cubs and the Saints. While the Saints were always my team, I've enjoyed watching the Colts and Packers and a few other teams as well. It doesn't mean I don't like the Saints.

So why can't fans in Chicago accept both teams? Whenever we play with bands from Chicago there is definitely a class issue. DIY musicians (like me) are almost always Sox guys; the Cubs are for the rich kids who have never had to work and wouldn't know how to tour in a van for a month if they had to. Supposedly. But whatever, I don't buy that.

This year, I will support both teams from my second-favorite city. And I'm just glad New Orleans isn't big enough for more than one football team... because Chicago will never know what it was like to experience what we just went through, as a city.
Posted by Mike at 2:55 PM

Ron, big fan of the blog.

I feel compelled to comment here as I may be the only die hard open-wheel racing fan who reads FW, who lives in Chicago and is a die hard White Sox fan (in fact, I was an employee of the organization). Racing and the Sox are my passions.

I believe there is much more posturing going on than appears on the face value. The reality is diehard Cub/Sox fans do not hate each other's teams - we basically hate each others' fans. Yes - I know that sounds awful and that we're all Chicagoans. But the reality is no matter which side of the city you're on out here, you know someone - a buddy, a coworker, a family member - who has decided to make it their mission to drive you insane with their loyalty of the opposing team. We're competitive with one another and we both love our teams and it boils over into a pretty realistic rivalry.

But despite what you hear, while it pained Cub fans when we "ahem" won the world series - they all watched it, cause they really did care (deep down). Hell, I watched the "Bartman" game in a bar one block from Sox Park - it was full of Sox fans. Yeah, sure, it was not a jubilent event but we were their - why? Well, really, we kinda care for the sake of the city.

In summary - the rivalry has its ups and downs, its realities and it false impressions. But when it's all said and done - Chicago has BEARS season.

Thanks for your inside view! I definitely got the feeling that it was more about the fans vs. fans. It's just strange to me that I've never met someone from Chicago who honestly claimed to be a fan of both teams. Even people who I know do not watch sports will passionately claim the Cubs or Sox... even when admitting in the next sentence that they hadn't seen a game in years.