Last Call Before The 500: ICONIC Forum, Pace Car Thrill Ride and 11 Rows of 3

So the race is barely 12 hours from the call to start engines, and while there aren’t any huge stories breaking, there are a few things that went through today that may interest you flowing into race day.

One thing that is pretty clear this season is that it’s not just IZOD bringing a full force of pull with the celebrities; but that it seems the series itself is plucking out some good ones with Jack Nicholson for the green flag and as we already knew. 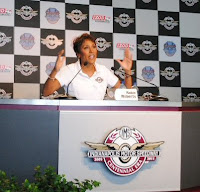 After seeing her in her press conference this morning it’s clear Robin Roberts is genuinely ecstatic over just having been chosen as Pace Car Driver; and is more than eager to get on the grid and to shoot around the track “This is definitely the fastest I have gone.”

A cancer survivor and daughter of a Tuskegee Airman,  Robin had huge praise for Indianapolis and the race “Can I just say one thing? And I cannot be more sincere about this. I have been a part of Super Bowls, Final Fours, presidential inaugurations, have traveled the world. The people here at Indy and the people who run this race are so superior over any people that I have been associated with at an event. Their passion, their hospitality, their gratitude, they really get you excited about being here. Don't lose sight of what you have here and the tradition, the pageantry, the beauty, the athleticism and all of that. You are so incredibly blessed. I just really appreciate being a part of it.”


This news conference was then followed by one of the best attended public drivers’ meetings the track has seen in a good while… but that wasn’t the big news to come out from this. Most every big race fan is talking about Brian Barnhart’s instructions for the drivers “We will return to the tradition of eleven rows of 3, for all parade laps and the final pace lap right into the green flag.”

This statement more than any other got the most applause and even a standing ovation from MANY in attendance. What will be interesting to watch is how well it is pulled off by a series full of drivers who are used to doing whatever they have wanted on pace laps, from spreading out, warming up tires to even jumping the starts well in advance of the green flag totally unpunished. Barnhart made it sound clear that each row will be expected to keep a set distance between each row all the way to the front straight for the drop of the green flag, no more accordion effect will be allowed.

The interesting thing will be to watch if A) Brian actually waves off anything that doesn't resemble what he described, but better yet B) if he will actually warn/wave-off/black flag Helio Castroneves when he hits the gas in turn 3, just like he’s done his entire career, right after break-checking the field. 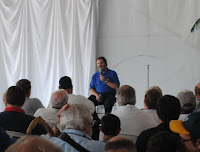 Last of note in the mid-day was the open-mic/town-hall chassis/engine forum run by Eddie Gossage of Texas Motor Speedway to hear any ideas the fans had about the direction of the series in regards to the new chassis and engine direction.

Before even getting to the car talk, Eddie because a one man comedy act ripping off one-liners that had everyone in stitches, finishing with a story about Robbie Knievel and Florence Henderson: "I'll say this about Flo... she puts the Cou, in Cougar."

Due to the ICONIC committee’s confidentiality agreement Eddie couldn’t really tell the group anything, but that wasn’t the point of this; instead it was for Eddie to let the microphone go around and let all the fans tell him what they’d like the new direction to be.

This forum style, of course, lead to the best and worst of its style; we heard some good recommendations; like letting Indy Lights and IndyCar share the main chassis parts like the Lola proposal so people like Sam Schmidt can easily move up a level. Make sure whatever chassis direction is chosen that it can be related to all 3 parts of the ladder system (USF2000, Star Mazda, and Indy Lights). Develop a formula, rather than deciding specifically what teams will be forced to purchase and race. 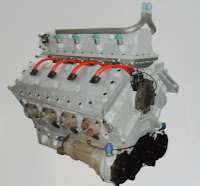 We also were graced with an unexpectedly well prepared attendee in Lee Brayton (father of the late driver, Scott Brayton) who came prepared with 2 poster boards containing the diagrams for an engine he designed in the mid-90s to compete with the infamous Penske push-rod engine. Lee simply asked that, even if needed to be done through some sort of equivalency formula, to let his BRAYTON B-1 engine be legal, as it never got the chance to run because it was made illegal before it ever saw the track (click on the pictures on the right to see bigger shots of the B-1).

There were some more difficult discussions about what was more important: low cost leading to more participants or engine/chassis competition which could lead to higher costs.

There was even the extreme: one gentleman cited that being “green” should be so important that he felt victory donuts should be banned because it wastes fuel... ok then. Let us not even attempt to figure out where racing in general or everyone driving to attend a race fits into that logic...

Then of course, just as on the many radio shows, fan forums, etc. there were quite a few attendees who simply ignored or hadn’t gotten the memo on what this forum was supposed to be about, such as one gentleman who got on the microphone and complained that he thought it was the Indy Racing League’s fault that his local paper didn’t cover races or race results… …?

Gossage concluded the forum in best that: “There’s maybe 200 of you here and we could hear over 300 different opinions with just you.” This is where the direction for the IndyCar Series actually seems all the more inevitable at this point.

They simply cannot choose a chassis and an engine; they MUST choose some kind of formula or system with options, because choosing any one single specification is certain to make a lot of fans (and teams) angry; and for cost containment to work while allowing choices which brings a higher price, they MUST allow the current Dallara to remain a legal option for teams for at least 2-3 years into the new chassis becoming available.

There clearly needs to be a return to the natural life of technology, in that it must be proven to be inferior/superior, something needs to go out and beat the Dallara, and the Dallara needs to be allowed the chance to stand up and get lucky as an underdog. Which chassis and engines get the chance to do that is almost irrelevant at the core, so long as the teams, manufacturers and engineers are the ones who choose what specific combinations they want to use to attempt beating it, not the league.
Posted by Allen Wedge at 12:23 AM

Actually, Allen, what Eddie said was, "Florence Henderson puts the 'ooooo' in Cougar."

Other than that, good summary.