You may have noticed a little lag in posting in the last 2 weeks here, but unlike the fine people running BP, we're not going to hide and make excuses... ok maybe excuses. Alas I can report it has nothing to do with us disappearing; but actually has to do with us working behind the scenes on a new site as well as some soon to be announced changes (for the better).

Even that isn't taking all the time, to be fair its just a monumental time for sports right now; we don't have an IndyCar race this weekend but we're loaded with World Cup games, NCAA baseball Super Regionals, NBA finals (if you like that sorta thing... Ron), Formula One's return to Canada, the 24 Hours of Le Mans and tons more.

Right now you'll find all of us doing plenty tweeting out there if you need your Furious Wedge fix; just think of it as some kind of cone device that we put over the massive outflow (or spill, if you will) of not posting. So lets get some stuff in here real quick.

Firstly, let me give a little shout out to Pat and all our other readers out there in England. You guys are great, we love you all, which is why its a shame U.S.A. is going to beat you in a little over an hour.

Seriously though, the World Cup (along with any other international competition) is my biggest drug, always consumes my sporting life. I'm waking up at 6am, on a Saturday!! today so I could watch South Korea pull an awesome upset, but not in upset fashion over Greece, more like "oh by the way we're kicking your ass" fashion.

Then Argentina plays some of the most aggressive first 45 minutes I've seen, seriously with all their hair and aggressiveness I bet they were even hitting on the Nigerian player's wives at the half. Nigeria looked good in the 2nd half but that wasn't enough, and I'll just say this about yesterday's matches... Mexico should be ahead in Pool B as the only winner right now.

So if World Cup is the addiction, the NCAA baseball playoffs has to be that crazy ass night you remember only when you wake up in the morning, just think "The Hangover." I L-O-V-E the Coastal Carolina Chanticleers, if not just for the great university name and mascot, but every game they play is every piece of drama you can. Its almost like they have a checklist as they go in a game: pitchers duel for a few innings, check; grand slam, check; wild pitch scoring a winning run, check; controversy with coaches getting tossed, check; diving catches to save innings, check; extra innings, check; amazing game saving plays, check, a guy throwing a complete game and then throwing relief 1 night later, check... and that was just their first weekend.

Right now they're down 4-2 to South Carolina in a game that already includes 2 innings with bases loaded, one with walking a run in, another with a 2 run home run, a sliding/tripping out at first base and now somehow we've started another pitchers duel... This is going to be so hard once England/USA starts, my brain might just explode. 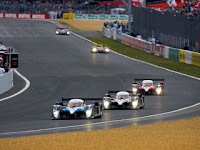 At least SPEED here is stupid enough that they cut the 24 Hours of Le Mans off the TV for NASCAR practice. That bears repeating, SPEED, a channel dedicating, allegedly, to showcasing cars and motorsports, is turning off the world's premier sports car race and showcase of technology, so that they can instead put on hours of box-cars using 30 year old technology run tests to see if they have any leaks... At least SPEED got a little sense in that they are continuing Le Mans online for Free, now if we could only get them to somehow do 24 straight hours of live coverage for Daytona 24... or at the least, not ban teams from doing live updates during races.

Apparently there's some NBA league out there, but I'm sure Ron can tell you more about that; I can tell you D.C. is all up in a frenzy over Stephen Strasburg.. and how can you not be? Kid (and I use that term because he is) threw ridiculous stuff, has many major pitches and all of them are the extremes of their kind. High 90 fastball, curve that drops 3 feet, change up that goes 20 mph slower than the fastball with no tip to when its coming... I now have a few Nats tickets to go check this out in person, surely something that melt my face like that scene in Indiana Jones.

Oh yeah and Boise State finally realized they need to go to the Mountain West, and Nebraska joins the Big 10.... which means the Big 10 now has 12 teams.... and the Big 12 now has 10 teams... You can't make that up. Now what are the odds Louisiana Tech finally comes to the conclusion they are nowhere close to "West" and get out of the WEC joining the SEC opposite Texas A&M???

So with all this and more going on, I need to get back to this, see you on twitter, and look out for some big announcements for Furious Wedge very soon. In all seriousness to all you World Cup fans, may everyone be safe, may none of the 300 players who fall down grabbing at legs actually be hurt, and may the best teams win...USA!
Posted by Allen Wedge at 1:36 PM

Ah, England clearly will win.. but we'll make a real meal of it. Usually in the Cup they take a game or two to warm up so I'd have preferred the Algeria game first... Will be fun, and nerve-wracking!

Le Mans is as dramatic as ever! 1 Peugeot out, 1 Audi delayed.

My head hurts from trying to follow both Le Mans and Canadian GP qualifying, love it though.

I have no idea what a NCAA is.

We'll see about the WC game, England has much more talent, but I wanted to get my trash talk out before the game so I'm not a bandwagoner in case we win :)

at least you got F1 qualifying, its delayed here so NASCAR practice can be live...ugh.

Yeah, tongue partially in cheek here too :)
If anyone in this group can ruin England's day I reckon the USA can.