As a teacher, I tend to read a lot during the summer since I have more free time. I've read about 8 books so far this month and noticed four of them were about sports. So I figured I'd give quick reviews. 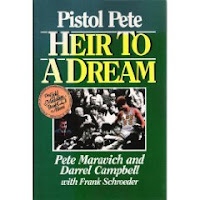 Pistol Pete: Heir to a Dream by Pete Maravich and Darrel Campbell

Maravich is my favorite basketball player, rivaled only by Jordan. (Put these two on a team together in NBA Live '96 and see what happens!) This book was written right before Maravich died, but was completed after his father's death. It is definitely an interesting time for him as his life sort of finally makes sense to him at the end. Very sad at times. I definitely want to get my hands on one of the newer biographies that have come out recently. 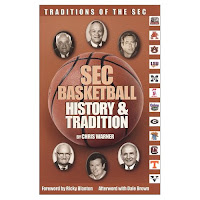 This is not exactly very well-written. There are misspellings and it is not organized very well at all. But the research and information is undeniably good. Great read for someone who grew up as a fan of an SEC school. It was fun reading about my favorite players from when I was younger (Shaq, Chris Jackson, Allan Houston, Billy McCaffery), the older guys I missed out on watching (Maravich, Barkley, Rupp), and then tons of people I'd never heard of. Afterword with Dale Brown brings it up a point.

I've been wanting to read this for years, but libraries don't seem to carry it. Found it used for .75 cents last week and read it in a day. Hilarious stuff. It's everything you expect from this book, although some will be disappointed in the lack of committed finger-pointing. He says a lot of "this guy HAS to be using steroids" and not as much "I injected him myself" as we were led to believe. It's really about how he studied steroids to the point that he believed he knew how to not only increase performance on the field but to also improve quality of life! And you have to at least admire his passion. Wedge tells me there is a sequel, so now a new quest begins. I also need to check out the A&E documentary Last Shot.


The Big Field by Mike Lupica

I am a huge Mike Lupica fan. I think he is an excellent sports journalist and his young adult books are always really good. I've had them on my summer reading lists for my students for the last 5 years or so. His stories are always about kids who are underdogs and, of course, how they overcome adversity. But his characters are believable and kids and adults can both relate. From a teacher's perspective, Lupica does not always do a good enough job integrating strong female characters. In fact, there are none in this story outside of a mother. That part is kind of unrealistic to me. But his stories are always good. If you haven't read his stuff before and are interested in young adult lit, I recommend Heat, Travel Team, and this book to start with.