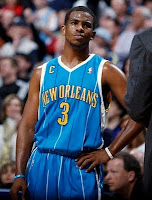 I have spent many hours this summer reading about Pete Maravich. I've watched tons of videos as well. I was always a huge fan, but there was so much that I didn't know.

Unfortunately it makes Chris Paul's recent behavior seem even more pathetic. It may be hard to understand if you haven't lived in New Orleans, but Chris Paul (along with Reggie Bush, Sean Payton, Drew Brees, etc.) became the face of a rebuilding city. We didn't even know if we were getting our team back from Oklahoma and then Chris Paul came along to renew excitement and represent the city.

So now he wants a trade and doesn't want to be there. I am hoping the Hornets do not give in to him. At this point, I'm losing respect for him and would ordinarily think we should get as much as we can for him. Then I remember how much the New Orleans Jazz gave up to get Maravich from the Hawks in 1974: 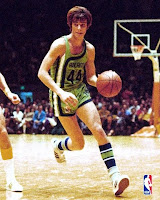 People around the league were furious that Atlanta ripped off the new expansion team so badly, while Hawks staff openly joked about how one-sided the deal was. Atlanta head coach Cotton Fitzsimmons even mentioned using a mask and a gun!

Atlanta's attendance dropped 34% and the Hawks made no improvement on the court, finishing 4th, 5th, 6th, 4th in the Central Division over the next four years. (They'd finished 2nd in all four years since drafting Maravich.)

Chris Paul cannot be replaced. The risks of him holding out or not playing his best can only hurt him in the long run. The Hornets need to make him stand up and keep his commitment or show everyone that he is a baby and is willing to quit on his team or watch them suffer until his demands are met.

It looks like the Hornets are set on keeping him, which is great. I'm hoping he changes his attitude and we can quickly forget about this.

Of course, the Hornets also need to do a better job of getting Paul some serious help, but that's a different complaint for a different day...
Posted by Mike at 12:34 PM