How to Correctly Get a Sports Background Without Actually Playing Sports

By now many of you may have heard about Maryland House of Delegates representative Michael Vaughn and his infamous playing career for the Dallas Cowboys. If you haven’t, here it is in short: Vaughn boasts both on his own website and resume about the experience of playing three years on the Dallas Cowboys.

Oh what times he must have had back in the glory days of the Cowboys… only he didn’t play for three years. In fact, he didn’t start a single game for the Cowboys… even more so; the Dallas Cowboys have no record of Vaughn ever being signed not to mention ever being at a tryout.

It’s not the first time we’ve seen someone get caught splurging on their resume, after emailing with Ron Furious about it, he told me this hilarious story:


“In 2001 Al Martin, who was playing for the Seattle Mariners had a collision with a teammate and said it reminded him of being hit by Leroy Hoard during a Michigan/USC football game in 1986.  The Mariners' media guide even said he played for USC.  Turns out, he never even went to USC! And USC didn't even play Michigan until 1989.”

And who could forget George O’Leary’s five day long career at Notre Dame due to lying about having a master’s degree at NYU and playing football for three years at UNH, neither of which as you can guess were accurate.

So what was the problem for all of these guys? They shot too high. They all went with football; big mistake because Americans LOVE football, and in most cases it’s easy to research, especially the Dallas Cowboys. That is why after discussing the matter with all three other members at Grab Bag Sports; we are happy to present to you: 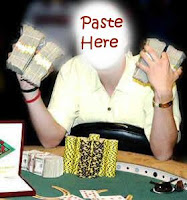 Each year there are over 50 WSOP events in Vegas, that’s 50 bracelet winners each year in Vegas, plus there is now a WSOP Europe and other WSOP tagged events over the country. The Vegas events alone have over 700 bracelet winners. Winning 1 bracelet can be done with no skill which is why anyone can win 1. The online records are incomplete because they mostly just track Vegas and even then they use nicknames and never have pictures… so chalk up a nice bracelet for that Deuce to 7 Lowball or Razz tournament you won; just make sure you have some kind of bracelet or story about getting robbed when people ask to see it.

Does everyone remember the ill-conceived Slamball league? Of course we do ever so faintly, guys with questionable basketball skill jumping on trampolines just so every score could be a dunk. Even the Wikipedia page is sketchy at best as far as recordkeeping, why just look at this shot of their first combine… Slamball has aged so well that in 8 years photos remembering it are already black and white!

8 – Member of USA baseball team
Ok obviously this one will be easier for someone to research… but why would they want to… honestly how many of you just learned that there was a national baseball team? Well there is, the USA baseball team is comprised mostly of college kids because the Olympics don’t allow pros?

Have you ever watched the Nathan’s Hot Dog Eating contest? Every single contestant has a record for something, spaghetti, French toast, eggs, meatballs, oysters, and really who out there is keeping these all straight? Just pick a slightly obscure food for an eating contest and make that world record your own. If anyone ever wants to contest it, chances are no one’s tried so Guinness will just recognize your world record title for most alligator eaten in 15 minutes.

6 - IndyCar Driver
Because apparently just about anyone could and did drive and IndyCar in the 90s and early 2000s so it’s not like anyone would doubt your credibility. And if all else fails just say you were a test driver for “pick country here” team in the now-defunct A1GP series. No one really keeps records of any of that stuff anyway because so many teams/cars have a revolving door on their driver’s seat. Dale Coyne probably can’t list all the drivers who raced for Dale Coyne Racing over the last 10 years, so why can’t you be one of them?

And if worse comes to worst, and you get called on it, it’ll only cost you a few bucks to drive a race for Dale and then you have a feel good story about making amends.

For Photographic help, just spend a couple hundred to do the Indy Racing Experience because they have to put you in a full racing suit and helmet, and suddenly you have evidence.

5 – Beat Shaquille O’Neal in a Free Throw Contest
True story, when Ron Furious was in high school he beat Orlando Magic guard, Chris Duhon, in a free throw tournament. Granted Ron was 18 and Duhon was maybe 13-14 at the time, but it’s totally true. Ron’s brother played against Eli Manning (in basketball), my brother played against Eli in football, Deuce’s cousin not only played against Leroy Hoard in high school (the same Leroy Hoard that supposedly ran over Al Martin) but Deuce’s cousin started a bench clearing brawl with him. Those are all true, and so why can’t your story? Just pick an athlete that was around the area you grew up in, make sure you say something that can’t really be tracked like a public youth league or a specific play like “Intercepted a pass from Jamarcus Russel.” and you’re golden.

Just maybe don’t go with the whole beating Shaq in a free throws idea, that’d probably hurt your resume more than anything.

4 – The Google Approach
It’s easy, type your name into Google and then start trying a random assortment of phrases like “career stats” or “records,” “field” and you’re bound to find that there is someone with the same name who played D-League basketball, Canadian League Football or is a sportswriter for the University of Washington. Just make sure you were alive when that minor league career for the Daytona Beach Islanders was played…

2 - High School Record Holder
For Deuce, Ron and I, this actually proves even easier than for most. See we all went to the same high school just outside of New Orleans. This school was destroyed by Hurricane Katrina, they’ve since built a new school with the same name, but records of everything before this new version are gone forever; suddenly no one can tell me I’m not the Javelin record holder for Hannan high, or that Ryan holds the record for most strikeouts in a game. If there’s a natural disaster that took your school out, or it closed down, it’s pretty easy, and even if your school wasn’t so unfortunate, just make a school up, it doesn’t even have to be the one you attended. High schools are so horrible at keeping records, and that’s just the ones that are trying.

The only problems this method gets you in trouble with is when you try to step on someone else’s records or if you stay close to your actual high school or people from it; and that’s why you got to stay away from living breathing records; just go for ones that doesn’t exist or no one cares about. You hold the record for most consecutive match wins for your high school’s chess team. Your school didn’t have a swim team, well I believe that’s 4 records you can have right there!

1 - Marathon Winner….. In Marathon-less City
There’s nothing easier than winning a marathon in which you were the only participant. Even better, try right now to find records of actual marathons… and very quickly you can see how this is #1 on the list. It’s hard enough to prove that the Meraux, La. Marathon didn’t exist, than to try and prove I didn’t win the dang thing….twice!

Print out some random corporate logo on paper and tape them together and have a friend take a picture of you crossing the tape with your hands in the air. If anyone asks you about it, you can always say it wasn’t a huge deal, play it down; and you know why, most people who win marathons don’t think they are a huge deal. They’re proud sure, but it’s not like they brag about it, it’s exactly what it should be, just a little something to put on the resume.


What else did we miss; give us your ideas in the comments section!
Posted by Allen Wedge at 5:00 PM