An Art Form That No One Asked For

In the past few decades a trend has really taken precedence that no sports fan will deny; it is simply that announcers/analysts have vastly increased their role in sports coverage. While some could argue that this has meant the expansion of knowledge depth given to fans/listeners/watchers; many (myself included) would argue that it’s actually diluted the analysis and really has only majorly served to promote… well… the analysts.

Writers and talking heads making a name for themselves is not anything new, but because of the expansion of radio broadcasting capabilities, the introduction to local TV stations, and then the explosion of the internet, satellite radio and all the other mediums leads to a whole heck of a lot of talking and writing sportsters. As a result, its led to an art form that I think many would like to see die, and that is the art of sports-peoples standing out.

This brings me to the recent story and so-called “outrage” over Dan Hampton. For those who don’t know, Hampton (a former NFL player) is an analyst on a TV show called Pro Football Weekly. On said show this past week, while analyzing the New Orleans-Minnesota game Hampton dropped this gem:


“the Vikings need to hit that town like Katrina.”


Now if you have a brain and a pulse, and know of Hurricane Katrina, you understand why it wasn’t exactly the smartest thing to say. What is more interesting to me isn’t necessarily his comment but instead the reaction to it. You have two sides, those who think it’s incredibly offensive and think Hampton should be fired (will address in a second), and those who think that the comment is “fair game” because New Orleans by their own will have interconnected the New Orleans Saints to Hurricane Katrina.

First let me tell you why it’s not fair game, by explaining that I grew up in New Orleans (25 years of my life in the New Orleans region); my family and many friends lost their homes in hurricane Katrina (including our very own Deuce and both my and Ron Furious’ parents) by no fault of their own except trusting a government who lied about how well levees were built. More importantly many people lost their lives in the disaster and many of us have gone through the destruction, and now the still ongoing rebuilding process; and that is simply not something that is ever “fair game.” If there is ever one rule of humor, its that real death and destruction aren't funny or "clever," but instead simply ignorant.

But the more important issue here for me isn’t the ignorance or stupidity of those who make the comment or think its ok; its people who are “outraged” and demand apologies or firings. For starters, it’s stupid to demand an apology because there’s no way sincerity can ever be part of a requested apology. Secondly rarely ever are people actually offended, and instead are just bored people with airtime on Fox News or MSNBC. But more importantly it’s because firing a guy over making this dumb comment would be just as dumb as he is for making the comment.

Because this wasn’t Dan Hampton’s first day on the job, and it wasn’t even his first time saying something of a stupid nature. After learning of this incident, I’ve gone back to read/watch more of Hampton’s analysis/color commentary and to be honest the Katrina comment isn’t exactly surprising nor does it offend me personally. It just comes across as stupid, the only offense to me is that someone who thought that was a good idea had the job in the first place and that now I’ve now lost time in my life having spent listening to him that I won’t ever get back. Firing him now would be like firing an executive at BP for lying about how well the cleanup is going.

Last week the Nationals turned “vacation” for Rob Dibble into permanent firing because of some comments Dibble recently made about Stephen Strasburg. ESPN had to fire Jay Mariotti because of his domestic abuse arrest and way back when Rush Limbaugh got in trouble of inherently racist things he said about Donavan McNabb. In all cases the stations don’t look good for getting rid of these guys, they looked stupid for having ever hired them in the first place. Dibble was a decent pitcher but he’s a horrible commentator/analyst; Mariotti was hardly likable or insightful and I’d say just the same for Limbaugh… not to mention the MANY other sports yakers who have had similar issues in history. 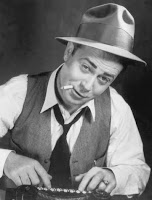 This isn’t even the first time someone has tried to throw a horrible metaphor into sports analysis. In fact recently while going through old newspaper clippings of my grandfather’s school/minor league baseball career, we discovered an astonishing metaphor from the local writer who compared his pitching hard like he wanted to “get those Japs.”

So it brings us to the cause of this whole thing to begin with; the actual problem that should offend people: It’s not Dan Hampton saying the retarded Katrina comment, it’s the fact that he thought he needed a “clever” metaphor to make himself stand out. The problem is broadcasters (especially ESPN) have put entirely too much emphasis on how much the sports yaker “stands out” and less emphasis on checking how smart they are for starters, and then the ability to stand out and make metaphors second.

It’s why we get so many idiotic TV commentators who can’t describe a single play of a game and instead give us “did you see that!?” type stuff or catch phrases, or analysis on things that don’t need analyzing. And it’s why I need to go bang my head against a brick wall because I just found out that Matt Millen wasn’t enough idiocy for the NFL Network, they decided they needed to add Joe Theisman to their cast.
Posted by Allen Wedge at 2:10 PM

I've noticed the trend here too, across all sports. Sometimes they seem to want to hire someone with a voice or a guaranteed vocal opinion 'to make good TV' rather than to actually help describe what they are seeing or to analyse it properly (and that includes not over-analysing).
You see the same thing on the endless conveyor belt of talent shows, the shows seem to be as much (or more) about the panellists/judges than the contestants. Something's gone arse about face. :)