I am obviously not knowledgeable about motor sports of any kind. Before Wedge started hosting race parties and pools, I wouldn't have even been able to name any racers. But at least I can now say that I recognize a few names when I hear them. I can also at least have fun participating in this blog, including our super-fun Blogathon, and even put Indy races on for a few minutes every now and then. And of course, I have now actually attended a race with Wedge here in Nashville. Here's proof! 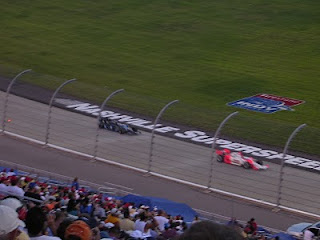 So tonight I decided to branch out even further and headed to the Tennessee State Fair to check out the Demolition Derby. When I got there, I realized quickly that I was in a new world. A world known as Demolition Derby.

First of all, 90% of the audience members either (a) were smoking, (b) had tattoos, or (c) both. Without a tattoo or a cigarette, I thought I'd be asked to leave before the demolition could even begin! 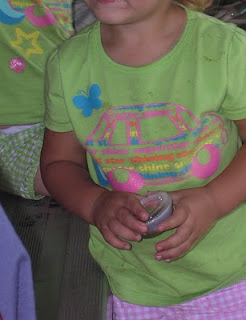 Then, while waiting for the doom and destruction to start, as my kids played with... you know... toys... the little girl next to us played with JALAPENO PEPPERS. She was sticking her fingers in the juice, then she'd put her finger in her mouth or her eyes. She was coughing and had tears in her eyes! But her dad was jamming to Lynard Skynard, so no one noticed.

Another strange occurrence was the presence of one lone merch table near the bathrooms. All they were selling were t-shirts with the name "Brynn Marie" on them. I thought this must have been the name of one of the contestants. The Danica of Demolition Derby! But no, it turned out to be the girl singing the National Anthem. They also told us she'd be signing autographs, but when I passed her table, she was alone, eating nachos. I bet she would've sold more shirts if she had been in the Derby.

Nonetheless, I am happy to report that you do not need cigarettes, tattoos, or even Brynn Marie autographs to enjoy a good Demolition Derby. Watching these guys smash into each other was amazing. It makes me want to get some guys together, buy some old cars, and do this ourselves. (Blogathon 2011. Who's with me?)

Here are a few pictures I managed to get... 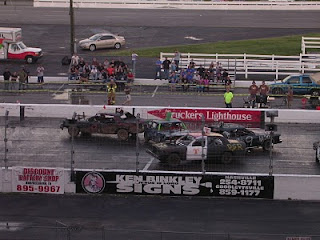 Car #89 was the first one to break down tonight: 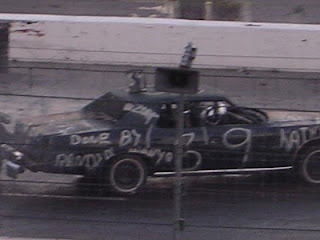 Then he needed a forklift to move him out of the way. 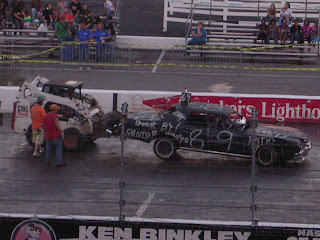 The quality here is even worse than the others, but it's a funny a story. This guy's steering wheel fell off before he even got into the demolition area, so he couldn't steer it in and didn't get to participate. 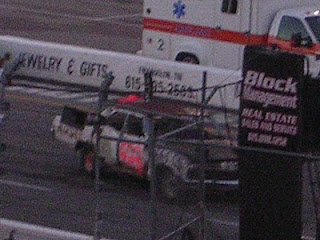 This is one of the last pictures I could get before it got too dark. The driver in this car was fine and even tried to continue in this heat, but couldn't get the car running again. 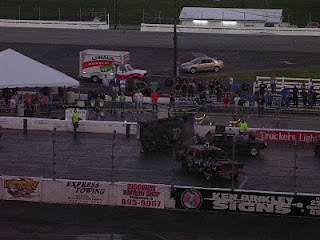 And here is a little video I got. Sorry there is no audio.

Unfortunately, darkness (and being so far away from the action) prevented many good pictures. But it was still a pretty fun night. This is 9/11. This is Demolition Derby. God Bless America!
Posted by Mike at 12:31 AM

Email ThisBlogThis!Share to TwitterShare to FacebookShare to Pinterest
Labels: mike