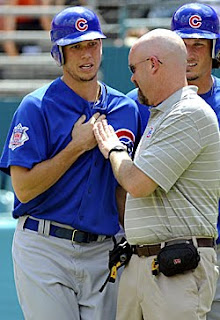 Tyler Colvin's potential rookie of the year season ended sooner than expected last week when a broken bat impaled his chest. So now we're hearing the debate about maple bats and how they should be banned. I think we could take it a step further. Similar to how interleague play (and steroids) gave baseball a burst of energy, we could take this opportunity to make some rule changes and add some excitement. Here are a few options to consider:
1. 100% Cork Bats - You know how we're supposed to believe that a corked bat adds like 200 feet to every pop fly? Imagine ALL CORK, ALL THE TIME! If that little piece of cork (and a ton of steroids) helped Sosa hit 66 HRs one year, then an entire bat being made of cork could yield 1,000-foot long balls. Right? (Plus, I doubt cork would impale a guy's chest.)
2. Other team gets a run - If your bat breaks, the pitcher should be rewarded for his extreme pitching that has the ability to break wood. His team should get a run. (This is an exciting possibility. The idea of scoring runs while on defense means you'd have to bat in the bottom of the ninth even when you have the lead. Obviously you'd want to just keep the bat on your shoulder and take the strikeout, but could today's stars really stand up there without trying to pad their stats?)
3. Make your own bats - Like on The Natural, you should have to make your own bat. From a tree. Wanna be a major leaguer? Fine, make a bat. If it breaks, make another one.
4. One bat per game - If you break your bat at any point, you just have to keep using it for the rest of that game. You can always just hope for a walk.
5. Mini-souvenir bats - This is an amendment to the "one bat per game" option. Except in this rule, if you break your bat, then for the rest of the game, you're only allowed to use the mini-souvenir bats they sell at the stadiums. (In Spring Training, we'll test out applying the same rule for batting helmets, where your back-up plan is the mini-helmet ice cream bowls.)
Posted by Mike at 12:40 PM