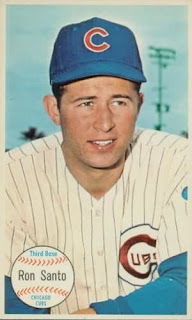 As (one of?) the resident Cubs fan(s) here, I feel I should say a few words.

OK, so I love baseball. I love the Chicago Cubs. And Ron Santo may have been my favorite human being that I have never met. With the advancement of the internet, I have been able to listen to him broadcast hundreds of games, making even the worst of major league teams seem entertaining to listen to. It was like watching Saints games with my grandfather or an uncle. Except this was baseball on the radio. Even if the Cubs were down 12-0 in the 8th, you had to listen.

I have two things to say about this.

1. The guys on the White Sox station (670 "The Score") have been ripping Santo a lot lately. The man had nothing to do with their team and they easily could have just ignored him and talked about the myriad other issues involving their own quite dysfunctional team. Yet this past summer, certain shows were dedicating entire hours to Santo insult time.

It was amazing to hear grown men go out of their way to attempt to humiliate someone who has never really done anyone any harm, a man who, at his worst, could be annoying to listen to if you don't like his team, I suppose. But that is easily solved with a power button or a channel switch, correct? At his best, putting baseball aside, this is a guy who raised tons of money and helped many with diabetes.

2. The Baseball Hall of Fame used to be the only Hall of Fame I really respected. For as long as I could remember, they always seemed to do things right. It was the absolute best of the best, a list of only the most legendary people to play the game. But now, I must say this: If Santo is now voted into the Hall of Fame, I will immediately lose all respect.

I don't know if Santo is good enough or not. I never saw him play baseball. But I know how much he wanted it. I know how much others said he deserved it, people who did see him play and whose opinions I do trust. It truly seems like there were some who were not voting for him simply because so many Cubs fans wanted him in. The same kind of people who openly insulted his broadcasting style and the way the fans adored him as an announcer.

Either way, to deny him the opportunity of reaching his final goal in life, only to go ahead and give in after his death, would be to lose all credibility as far as I'm concerned. It would make the voters seem power-hungry and petty to me. If he is good enough this year, then he was good enough last year and they should've done it then.
Posted by Mike at 8:57 AM

Just to clarify, I'd love to see him get in because it is what he wanted and I'm sure his family would feel a sense of justification. I just hate the process and how we rob some people of the honor while they are living.

Also, to put my Cub and Santo biases aside for a minute, you can't just put someone in because he is the best player who never got in. If that's the case, and you vote Santo in, then someone else will be the best player not in, right?

And... isn't Pete Rose the best player who is not in?