Throughout Blogathon, we will be posting a few ideas that we think could've made interesting topics for ESPN's 30 For 30 Series.  Feel free to comment with ideas of your own! 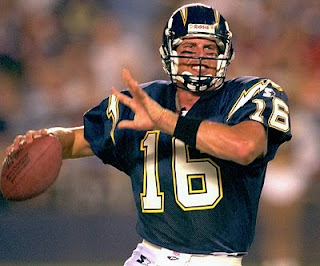 I'm pretty sure Ryan Leaf's story would be good for an hour-long documentary.

- 1998 Draft: Chargers traded two 1st round picks, a 2nd round pick, and Eric Metcalf in order to move up one spot to get Leaf.  Matt Hasselbeck was also available.

- Rookie season: Skipped rookie symposium.  Completed 1-15 for 4 yards with 3 fumbles in his fourth game.  Finished the season with 2 touchdowns and 15 interceptions.

- Coaching career: Hired in 2008 as West Texas A&M as a volunteer QB coach, but then was fired for asking players for pain pills.  Was later arrested for burglary and drugs.