So Monday, the American Le Mans Series announced that their

series would not have any races live on television, but that all of them would be aired live online. The general public response has been either awesome or dumbfounded, but not really anywhere between. I don’t have any census data, but I’d bet that the line may likely be drawn by roughly how tech savvy the opinionator is.

What the new deal isn’t, is revolutionary (as ALMS would like you to believe), but it does include some new ideas that other sports will watch closely. In reality this new setup is actually just copying directly from ESPN’s World Series of Poker coverage, and will likely go whatever the same route poker takes over time.

Both ALMS and poker have very long events, that are not conducive to a normal TV window, thus both will have delayed/edited for TV window coverage. However both can attribute a large percent of their popularity/following to tech savvy fans that don’t wait for delayed/edited TV replays.

As a result in poker, ESPN first tried the November Nine method of delayeing the final table of the tournament till a day before it airs, but that didn't complete it for fans, so this year due to popular demand, they aired the WSOP Main Event final table live on ESPN3 for over 8+ hours of straight coverage. We know from the recent motor sports history of A1GP, IndyCar and the Race of Champions that fans will fill an online viewing queue to get whatever racing we can, and thus the conversation comes back to ALMS which will now be airing all its races live on ESPN3.

So ALMS is abandoning live television altogether; if you’re a fan of the series, you probably don’t even see the difference to the past. SPEED rarely covered a full event live outside of Sebring, and when they did, you spent most of the broadcast watching commercials for Shamwow and EmeryCat. NHRA is a regular time-delayed broadcast, and so was ALMS on NBC and CBS. The IndyCar Series for quite a few years now has been broadcasting their races live online, and the now-defunct A1GP series, while doing most things poorly, had an incredibly hi-bar setting online coverage.

So having ALMS on ESPN3 isn’t exactly a crazy new concept; what’s new is that ESPN3 is gaining steam as an online sports resource. Since my provider picked up ESPN3, when Mrs. Wedge is busy watching Top Iron Cupcake Battle, I’ll start up ESPN3 to see if there’s a live event anywhere I can watch. That‘s the element ALMS is hoping to capitalize on, and one that IndyCar never got the benefit of when they were solely on ESPN/ABC.

Another aspect IndyCar never got the benefit of was X-Box Live; streaming ESPN3 straight to a TV. While not everyone has an Xbox360 you’ll bet some ALMS fans do, and I can assure you many of them will gladly prefer the option to stream the race on their TV than on a small computer monitor.

The questions we’re all waiting to see answered:

Will fans get enough information when watching live? Though the series is now defunct; A1GP set an extremely high bar for what an online broadcast can be capable of. On their final season, the A1GP online broadcasts gave you the race video and announcers, the live standings (and tracking map) for the entire field, and the amazing live telemetry for any car in the field including brake/gas, gear selection, steering input and even if the driver was pushing their power boost button. 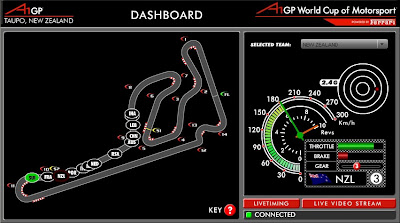 IndyCar is the only series that’s even gotten remotely close to that, but often has issues with crashing or buffering; and NASCAR isn’t even attempting to give that kind of thing in a combined free state. ESPN3 at this point is a small video box; ALMS has many classes and many cars on the track; a scrolling bar at the top of the video isn’t going to suffice too long for the tech savvy audience.

What about fans overseas? Right now IndyCar fans regardless of location can watch any race; the same went for A1GP; but the same doesn’t go for ESPN3’s current setup. In fact, access to ESPN3 is even restricted within the U.S. completely dependent on whether or not your Internet Service Provider was willing to pony up the extra bucks to ESPN for the privilege of letting their customers access to it. We already know, via the annual Grab Bag Sports Blogathon, how angering it is to not let our friends across the pond watch the 24 Hours of Daytona; but ALMS has direct European roots and cars, you better hope ESPN is soon thinking about throwing Europe a bone.

Will a shortened/edited TV re-broadcast do any justice to the many ALMS classes and storylines? Just how much can ESPN fit in a 2 hour window that they will undoubtedly already be smashing as many commercials as possible into?

Will the cachet of ESPN bring in more sponsorship to the series? We know that Versus had an initial negative connotation to the IndyCar Series when they left full-time ABC/ESPN to the point that sponsorship pitches put broadcast out of any benefits listings. It’s slowly starting to gain visibility and NBC will help them there; but the question remains. Will doing the opposite, have the opposite effect and immediately becomes a selling point for ALMS teams?

Will ESPN start covering ALMS? None of the above ideas and concepts will mean a whole lot in the long run to a sport that ESPN.com doesn’t even cover? NHRA, IndyCar, NASCAR and Formula One all have regular coverage on espn.com while ALMS doesn’t. Will ESPN suddenly get behind ALMS? Will poor John Oreovicz suddenly be forced by ESPN to cover yet a 4th different series on his deeply buried section of the “sports leader’s” website?
Posted by Allen Wedge at 12:31 AM

Great questions, all, Wedge. Even though I feel like I'm a pretty tech-savvy guy (even though I haven't gotten around to figuring out how to get Skype set up on our new laptop), I'm really lukewarm at best on the new ALMS deal. I can't see myself staring at a laptop screen for 3 hours for the regular sprint races, though maybe with HDMI outputs and what not becoming more common, it'll be better to watch on the big screen. I guess that ALMS's thought process was that they needed to try to get eyeballs on the series through mainstream, established channels (with the ESPN3 thing being a bone thrown to their hardcore fans who will want to see races live), and doing the edited tape delayed packages was the only way to do that (along with, I'm guessing, either taking no money from ABC/Disney/ESPN or paying ABC/D/E for the priviledge of being on their channels). What's interesting is that this is what a lot of people, Robin Miller included, have basically been suggesting IndyCar do instead of getting paid by Versus. I guess we'll see in the course of the next 12-24 months which was the best way to go.

While I obviously do not watch much racing, I canceled cable months ago. Aside from network coverage, I mostly watch sports online.

Believe it or not, I actually get more done since I can multi-task. (We don't really need to stare at the screen for three hours to fully comprehend what is going on in a football game.) And my family enjoys the fact that I don't tie up the TV all the time.

I am all for more online content, whether we are talking about sports, movies, TV, anything.

And who knows? Maybe the cable/dish companies would have to lower prices eventually.

It's an interesting prospect. We may look at this change in years to come as the potential tipping point or something that severely damaged the series - I seriously hope it is the former.
Indeed, it is a risky strategy, but a brave one.

Good post. I'll be fascinating to see which turns out to be the best option. Personally I think having live streaming is fantastic and should be the norm in this day and age. GT1 World Championship and Superleague Formula both offer it, even Formula 2 offers it, and all for free. But I don't think it should be at the expense of live TV - each of those listed above are usually live, or if they aren't live they are replayed in full (not highlights) not long after.

Thanks for mentioning European coverage.
Live coverage was dropped here a couple of years ago and if we were being 'legit' we had to rely on a 6 or 7 day tape delay on a small channel, or not be legit and find justin.tv streaming or a torrent.

I actually had a 500mb external drive full of torrents fail on me last month before I could watch the 2010 ALMS season I'd grabbed. I don't have time to watch every race live so I want to download them and I want to do it legally, but if I can't I'll find another way rather than go without. Supply and demand.
The ideal scenario would be to make every race available live on TV and web for when we can catch them, and then a day later offer them on iTunes or directly on the series website for two or three dollars per race, like a TV show, and have it message you when a new episode (race) appears. Buy a season for a discount.
It is 2011, this stuff shouldn't be beyond the realms of possibility.

Pat, you're right, with our technology this should all be available. I'm sure it comes down to the question of who would receive the revenue.

I love my mlb.tv subscription. For $100 I can watch all MLB games live and also have access to the archives for the entire season. I wish every sport would follow this model, but for the NFL you have to go through DirecTV and it costs closer to $400. You can access the games online with this subscription, but I don't know about archives.