Fantasy Football: Can we shut up about drafting RBs so high yet? 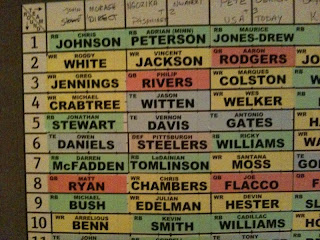 I know fantasy drafts are still like seven months away.  I know the NFL season isn't even over yet.  But forgive me for being so stressed about this stuff.  I like Peyton Manning.  I like Drew Brees and Marques Colston and Tom Brady and Tony Gonzales.  But I leave every draft feeling like the owner of my league's Carolina Panthers if I didn't walk away with FRank Gore and Ryan Mathews.

But I'm here to tell you that I think this terrible trend's decline is near.  Just take a look at this year's regular season and postseason for proof.

First, of the top 10 rushing teams in the NFL, six of them (Raiders, Jags, Giants, Texans, Bucs, Vikings) did not make the postseason.  Granted, the Vikings were the only team on that list to be out of contention the last couple of weeks and the other five were fairly close.  The fact remains, however, that teams like the Bears, Packers, Saints, and Seahawks were in the bottom half of the league and still made the playoffs.

Of the regular season's top 10 rushing teams, only the Jets remain.  It will be very interesting to see how that rushing game performs against the Steelers today.  In fact, other than a couple of long runs, this entire postseason has been about the passing games and the defenses.  Of the four teams playing today, I personally think of a quarterback and/or a coach before associating a running back with the team's success.

Here are a few facts:

- The Bears and Packers finished 22nd and 24th in rushing yards respectively during the season and are now playing for a Super Bowl berth.

- The Falcons ranked 12th in regular season rushing yards per game and, as of today, now rank 12th in the postseason (out of 12).

- The postseason's leading rusher, GB's James Starks (94.5 ypg), was nowhere near NFL.com's Top 15 pre-ranked fantasy running backs.  In fact, you can look through their Top 80, which is as far as they ranked.  No James Starks.  (Of their Top 15, four are in the top fifteen for the postseason: Ray Rice, Rashard Mendenhall, Shonn Greene, Jamaal Charles.)

So will the NFL finally start to change?  Will team execs notice the trend and stop placing so much emphasis on rushing during the regular season?  As fantasy players, will we finally be able to draft QBs and WRs in the 1st round without having chicken wings thrown at us?

James Starks will be a top 5 fantasy draft pick next year, you can book it. then people will consider him a "bust"

OMG STARKS JUST SCORED A TOUCHDOWN I'M DRAFTING HIM WITH MY FIRST PICK!

Yeah, Andy. At a draft a couple of years ago, my brother took so much crap for drafting Brees with the first pick. He had something like 500 fantasy points that season.

With the way the league protects the QB these days while the RBs are getting pounded on every play, it does seem safer from an injury standpoint as well. Especially in a keeper league, since these RBs seem to be good for maybe 5 years while Peyton has been leading my dynasty league team for like 12 years now.

Obviously, Fantasy Football is a numbers and percentages game. The fact is you have a much higher percentage of selecting the best player in the league if you select one of the top-projected RBs.

1) How many people this season selected Drew Brees as their first-round pick? A LOT. was he worth it? eh... probably not.

How many people selected Randy Moss and Andre Johnson as their first round pick? A LOT. were they worth it? no.

but i'll tell you who was worth a first round pick, and went in the first round: Peterson, MJD, Gore, Rice - the top 4 projected players in Fantasy this year.

2) you have to start at least 2 RBs - another reason for the strategy of nabbing a solid runner in the first round.

3) in PPR leagues, RBs are without a doubt more valuable than other positions - all of our leagues are just that, Mike.

4) The chance of hitting the "best" QB in the league by selecting him in the first round, let's face it - it's very slim; almost never happens. And when it does, it's probably Peyton.

I see where your argument has a point - but I really don't think the numbers "prove" that RBs shouldn't be the most highly touted first rounders in fantasy. Maybe we'll see how an extended NFL season will go - that is definitely going to shake up the Fantasy game.