What I've Learned in the Past Few Hours

Starting with MarioKart, I learned that bikes are way faster than Karts, and everyone hates Wario's gold mine.

I've learned that based on the NASCAR All-Star Shootout that started over 4 hours ago and still hasn't concluded, that the future of NASCAR is screwed if these are their drivers... 3 red flags, countless yellows at this point... and the fact that this race STILL is not over... how showing this live is better than 5 additional hours of Daytona 24 Hours coverage is beyond my comprehension. 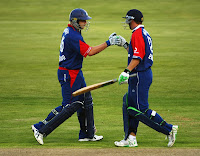 I've learned that on the particular pitch of the Australia-England cricket match, that when the team batting first scores 249 or more, they win 9 out of 12 times. Australia just scored exactly 249, so we'll need to see how that goes.

I've learned that cricket is just as stats-crazy a sport as baseball is... no word yet on if Fantasy Cricket is a big deal...

I've learned, once again, that playing poker with strangers at a "play money" table sucks, because they all just hit the all-in button every hand, its no fun.

I've learned that endurance racing means never count anyone out. The Suntrust and Ganassi cars have gone back to the garages again and have since gained laps back and are still well within striking distance.

I learned Patrick Dempsey is starting to get the hang of GT, he led laps folks, huge for him and that team!

Only 40 minutes to the Australian Open Final between Andy Murray and Novak Djokovic!
Posted by Allen Wedge at 2:23 AM