Ex-driver Justin Bell is one of the "on the scene" reporters for SpeedTV for most of their long distance endurance races. At Daytona this year for the 24 Hours, he spent a considerable amount of time interviewing fans in Daytona's backstretch Fan Zone, who seemed only tangentially aware that there was a race going on (in fact, I think one of them claimed that they were waiting to see Dale Earnhardt Jr., who may not have even been in the state of Florida at the time). Usually, when Justin's doing these remote reports, it seems that Justin may be suffering from...an imparement of some sort? I can not say if this imparement stems from massive sleep deprivation, or a beverage or five that he's recently consumed (be it coffee, Red Bull, or something a little stronger), or if it's just from years of carbon monoxide intake in the cockpits of enclosed race cars, but whatever it is, the results are usually spectacular. This year at Le Mans, Justin has not disappointed. While saying something about how this is his last gig working for SpeedTV, he claimed to have found an old "friend" of Dorsey Schroeder, who is working with the booth crew this weekend. 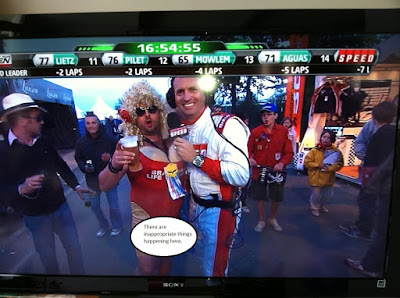 This man should be getting a raise, not walking papers. The campaign to save Justin Bell's broadcasting career starts right here. Who's with me?
Posted by The Speedgeek at 4:35 PM

Absolutely on board. Save Justin Bell! Is he actually on the way out? Why?

Ditto, thats some of the best coverage on these races, especially considering how much time needs to be filled.