On the Passing of Dan Wheldon

I could write about the confluence of things that caused Dan Wheldon’s death, the fact that the owners of the series had refused for many years to go to a newer chassis in order to save money, that some of them are still angry about going to a new car cause its expensive to buy newer stuff… I could talk about how ISC and SMI have ruined all their oval tracks by making them incredibly high banked to create pack racing for the sake of “entertainment,” even though that banking always causes “the big one” or about how technical restrictions on the engineers cause the teams to be too even causing the big packs like we had today… or maybe it was just a fluke set of circumstances and physics like what happened to Jeff Krosnoff, or how ridiculously cruel it is that Dan has been using this year to help Dallara and Honda develop the new car that has aspects of its design done specifically to stop this exact kind of accident from happening, and the cruel irony that he was killed by the one thing he was working to prevent… and that we were just 1 race away from getting to that new car… but any real in-depth writing about that would be done out of anger…  so I just don’t feel like doing any writing in detail about that… the fact is Kelly (my wife) and I were both immediately horrified when we saw the accident and both cried when we heard the official news, because of who Dan was and how shocking and abrupt it all is.

Like I said on Twitter and Facebook, it’s not like I knew the guy as a friend, but I met him at both Richmond International Raceway and Indy as a “media” member for the Furious Wedge (as it was called then), and both times he was as kind and nice as could be to me. He didn’t ask who I worked for, didn’t look at my credentials to make sure I was legit, I asked a question after qualifying in Richmond in the media bullpen and he smiled and answered and was as nice as could be. There’s a lot of drivers in the series, and a lot of them are happy, distant, shy or pricks depending on how the day is, but I’ve watched Dan since he was in the minor leagues, and I seriously don’t think I’ve ever seen him be angry… ever… He always signed the most autographs and stayed the longest around for fans and to take pictures, and the year he lost the championship on a technicality of tie-breaker, he wasn’t angry, disappointed, but not angry and whining about rules; he took it in stride and came back the next year driven to not have a tie breaker get him again.

He simply loved racing, and loved life. One year my wife and I decided to vacation to Vegas for Thanksgiving week. I of course knew the karting SKUSA Supernats were in town that week so we fit it in for a day, and sure enough Dan was competing; and when he wasn't competing you found him talking to other aspiring karters and fans, that was Dan at his purest.


One year at a race in Homestead-Miami he was dominating the race when his team completely screwed up a pit-stop, and he lost like 16 places as a result, and instead of being angry on the radio, he told his team not to worry about it and that he’d do his part to get those spots back… and he did, coming all the way back to win.

Even when the Ganassi-Target team was found out to be negotiating with another driver (tony Kanaan) to replace him in 2008, he didn’t say anything bad about them, he went about his way behind the scenes and started negotiating with other teams but publicly kept plugging his sponsors at his current team, same thing for National Guard team when he was there… I seriously can’t say just how happy and full of life he was, and that’s what made his win at Indy this year so great, he was there celebrating with his son, even though he knew that was likely his only race this year, then he jumped in the broadcasting booth and immediately had all the fans loving him and wanting him to become a broadcaster if he wasn’t going to be racing because he was so good.

Like so many racers before him taken too young, he had so much ahead of him, the broadcasters were chatting with him from his car on the pace laps and Kelly and I were just commentating on how he is the best spoken driver in the series and a PR dream because he has mastered the talent of mentioning sponsors without making it sound forced. He not only won Indy, but not just 2 days ago it was announced that he had just signed a new contract with the Andretti team to be Danica’s replacement, he was about to go back to one of the best teams in the prime of his career. And outside of his career, he went from being a young 21 year old rookie talking about partying every night to married and just having had his second child... and that’s the part that really makes this a travesty, right now none of that other stuff matters. 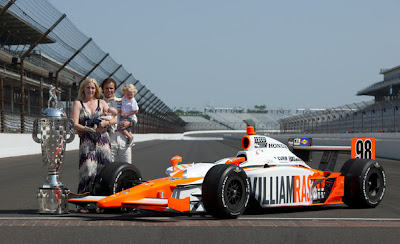