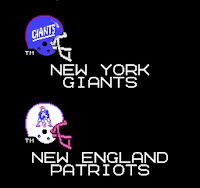 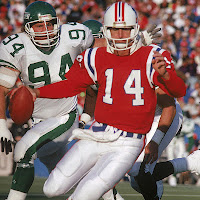 Edit: It turns out that New England Patriots running back John Stephens was tennis player Sloane Stephens' father.
Posted by Mike at 4:08 PM

Oh, how I wish we got graphics like that during the actual Super Bowl. Our viewing would be immeasurably enhanced.

I'd love to have seen an accidental onside kick though. An (almost) accidental touchdown will have to do, I suppose.

No, just 4-0 in Super Bowls. It really just means that I've been lucky enough recently that the team I wanted to win has won it. A more amazing experiment would be to let the computer control both teams and see what happens. But other sites do that.

And yes, the accidental touchdown was better than my repeated accidental onside kicks.

I think Bradshaw was just in BAD condition.