Better Ways to Break a Tie

In case you had not heard, the Olympics are in one month, and that means all of the countries around Earth are doing their trials and qualification to see who will represent them in London.

And what you may not have heard even if you knew the above was that in the U.S.A. Olympic Track & Field trials for the women's 100 meters; there was a tie for 3rd place between Allyson Felix and Jeneba Tarmoh. I don't mean a really close race, or a debatable result, I mean a literal freaking tie, as in no photo evidence can show anything but a dead heat for the final two runners. 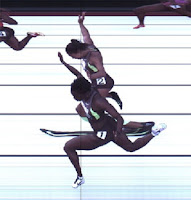 "To break the tie, Felix and Tarmoh will be given a choice between a coin flip or run-off."

Yes, you read that correctly (full ruling here), a coin flip, whether or not you get to participate in the most prestigious sporting event on the planet can be decided by chance.

This doesn't even account for the fact that researches have proven standard U.S.A. coins do not yield 50/50 results. To that point, I went to Twitter and asked folks what could be better:

which got the reply:

AGREED! In fact there are many ways we could put this in the runner's hands outside of the run-off. In fact the ruling also states that one runner could opt out and become the alternate. That means they can literally choose whatever way they want to break the tie and officially the 2nd runner would just opt out.

So here's just a few quick ideas on how they can break this tie: 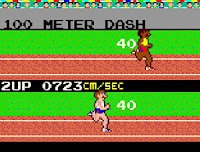 Option 1: They compete in the 100 meter dash on the original Nintendo game "Track & Field." It still requires skill, speed, and the same short amount of power burst, but shouldn't subject them to unnecessary injury.

Option 2: First one to London wins! Race around half of the world!

Option 3: Penalty kicks. It makes about as much sense to determine a soccer/futbol match with that nonsense, but yet FIFA has never shown any inclination to change it and the world hasn't rioted yet so its apparently acceptable.

Option 4: Have the crowd vote via show of hands at the trials tonight.

Realistically both runners are in the 200 meters still yet to be determined and they'll likely wait for that result, but if they both qualify or both don't we're right back where we started.

So what say you readers? What's some other good ways they can break this tie?
Posted by Allen Wedge at 12:27 PM