Can I Complete the 5th Week of Not Watching Football? 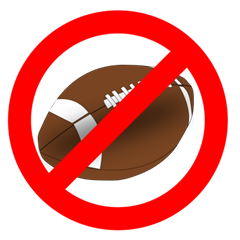 So roughly 5 weeks ago I started the, some would say, crazy idea to try and not watch any football this season. Insane, stupid, can’t be done, terrible idea… all and many more things have been said about this fun self-dare.


So lets go back over the rules I’ve set: No high school, no college and no NFL; or more specifically I just can’t turn it on or any football oriented analysis (NFL Network, NFL Primetime, college Gameday, etc.). Its ok if I’m in Buffalo Wild wings and football happens to be on or if I’m watching a multi-sports highlight show and football comes on.

Easier Than I Thought: Avoiding the games.
This part has been much easier than I expected, but mostly due to having a lot of outdoor chores I can take care of on the weekends and also from being on a vacation for one of the weekends. Mostly right now there is a ton of stuff to put on the TV if I want options outside of football, but it seems like my best option is to really avoid TV on weekends, because…

Harder Than I Thought: Actually avoiding football coverage.
I knew football had taken over America’s culture when the Draft became an all day TV show, the a 2 day and now a 2 night and then 2 more day show. Not to mention all the coverage it gets on ESPN throughout the year. What I did not really realize until now is how much its really taken over more than just ESPN.

Local channels devote SO MUCH time to our local teams, Multi-sport networks practicaly shut down the “multi” part of their name once football starts. Its very hard to be a sports fan and watch sports on TV without being solicited with football at every turn. From this aspect, avoiding football coverage has basically been avoiding the TV during certain timeslots because there isn’t a ton of quality programming out there in the off hours of live sports.

Here’s been one great way this has worked out for me.. NBC Sports Network: America’s Cup, Formula 1, IndyCar and Premier League are all on that network AND they all show in the early hours before NFL games start, which means they help me avoid football analysis/coverage becfore other sports in the US begin. That network is basically the “other” sports channel now, and many of those sports happen in the early hours, I think the only football they have is some college stuff; (this may also correlate to why fox Sports 1 has already quickly jumped past NBCSN in ratings and why NBCSN struggles).

Nowhere Near As Close to What People Said Would Be Catastrophic: Effect on my Fantasy Teams.
I debated with some folks on how hard this would be, and let me be frank, Fantasy isn’t as easy without watching games BUT it’s by no means hard. In my main league I started 0-3 but it had nothing to do with not watching coverage. In week 1 I had the 2nd highest score of all the teams, but played the guy with the highest score; week 2 I had 4th highest but again played person with highest… that’s just bad luck, as this week I’m on my way to victory. I’ve been able to play the waiver wire just as I normally would, it’s not been too shabby.

Bigger Consequence Than I Thought: Defenses and Kickers in Fantasy
The one aspect of Fantasy that has taken a hit is week-to-week strategy for free agents. I normally in all leagues pick up Defense and Kickers on a week by week basis based on who they are playing. Its generally worked well because you just pick up a defense who is playing a crappy team (like say the Browns). The issue without watching games is that I don’t have the best sense of who the crappy teams are. Of course I can see the records, but 4 weeks in that’s not the best tell; and twitter is great but all the people I follow are more on the players or the sarcasm too much to really tell me who is terrible, so for now I’m just guessing that the 0-3 or 0-4 teams are the worst offenses.

As for kickers, I generally pickup kickers playing against good defenses, because their offense tends to get stuck in the redzone a lot. Its not as hard as Defenses, but still a little spotty at best.

Better Than I Thought: the flurry of options out there plus the list of projects I can come up with… 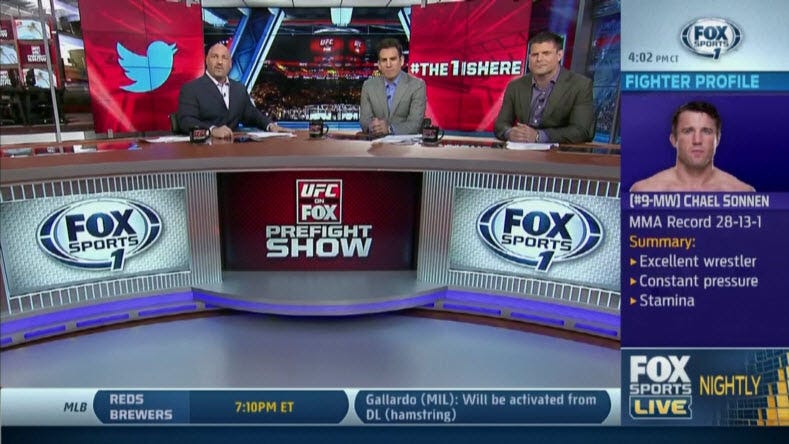 As I said above, I’ve been able to watch many other sports like America’s Cup, UFC, Premier League, Formula 1, Grand Am and World Cup Qualifiers. What I didn’t really grasp as well before was how much coverage these sports get hidden amongst the football stuff. UFC gets a weekly analysis show on Fox and has a weekly reality show, Premiere League gets full on pregame analysis just like football on NBCSN, likely because its so early in the morning so easy to make that space.

Most of all, I was blown away by how much coverage ESPN gave the World Cup Qualifier against Mexico, almost 3 hours of pre-match coverage.

In addition to that, my house project list has definitely been more productive with the detachment to football. I’m not saying it’s a monumental difference, but there’s definitely been an uptick in what I can accomplish on the weekends.

Unexpected Side Effect: Conversations with strangers
One of the effects so far that I didn’t forsee is how universal (in the U.S.) football really is. At the doctors office, at my work meeting with outside vendors and other departments, in the grocery store, with the neighbors, at barbeques; it seems almost everywhere the top topic for everyone is football. Especially in places where I use my credit card, which is from my alma mater U. of Southern Mississippi. People go from that card right into football conversation, even the receptionist at the doctor’s office went right into talking about conferences with me.

I knew a lot of people talked football, what I didn’t realize is how being out of touch with football games (the knowing of what happened) would affect me in daily conversations when people want to talk about the games that just happened, and dumb coach decisions etc.

The worst idea that I’ve tried more than a few times is tell people about my “crazy” no football challenge. I think 80% of the time I just get blank stares in return, or dumbfounded jaw drops. The other 20% are wives who say “could you tell my husband to do that.”

That 2nd conversation frankly is an even more awkward conversation because they start going off on football and sports in general, and if you remember I like sports, I don’t really do well in sports bashing conversations, especially when the people talking to me are addicted to Kim Kardashian’s life.

Angel on my shoulder: Making this thing much, much easier is that both my (USM) and Mrs. Wedge’s (BYU) alma maters lost in the first week of college football effectively eliminating them from the shitty BCS system. In fact USM is taking it to all time lows these days "Southern Miss football: The nation's longest losing streak continues." Frankly not watching college football has been incredibly easy because the system is so terrible and the NCAA is so terrible (no shock they “decided” to not make the EA sports games anymore. In addition to that, I do get small fixes via my twitter feed; plus I've had no shortage of other sports to watch.

Devil on my shoulder: Undefeated Saints, LSU, Miami, MNF plus baseball, IndyCar,F1, NASCAR, Grand-Am, ALMS and world Cup Qualifiers are all coming to a close…
Just read that above. Baseball’s season is over and soon it’s playoffs will be too. Grand am and ALMS both ended their seasons these weeks, IndyCar will be over in a few weeks along with Formula 1 and NASCAR… and there’s only 2 more rounds of CONCACAF World Cup qualifiers, and we don’t get coverage of any other region. Sure hockey and basketball are starting but I generally hate basketball and don’t think I can resort to watching the NBA, ever.  Worst of all…

I stop watching football and the Saints start undefeated, and not only that but they have a Monday Night Football game tomorrow against undefeated Miami… and I have Jimmy Graham on my fantasy team and need him to score points for me to win my match-up… and I can’t find any other sport co-scheduled in that time slot.

If football were an addiction, tomorrow night would be my biggest chance to relapse, hoping I can make it the full 5 weeks… we’ll know soon enough…
Posted by Allen Wedge at 9:50 PM