All summer long, basically since I got home from Indianapolis in May, but even more so since going to see "Turbo" a month or so ago, my 3-year old has been begging to go to a race with me. More specifically, she's been asking to go "to In-din-apolis", which is probably understandable, given Turbo's subject matter and the fact that she was VERY interested to hear that Daddy goes where Turbo races every year. However, Indy is yet another eight months away, and she is still a solid 5-6 years away from being anywhere near prepared to brave even driving by the Coke Lot, much less slog through it after 200,000 people have been camping/drinking/performing bodily acts in it for three full days. And we won't even start on the fact that the Turn 3 Infield is not fit to be witnessed by anybody under the age of 35. Sorry, sweetie, Indy is going to be waiting for you, but you're going to have to wait for Indy until at least 2020.

On the other hand, we do live in America, and right in the middle-ish part somewheres to boot, so there is never a shortage of racing to be had on any given weekend. Knowing that, Mrs. Speedgeek and I picked a weekend (conveniently positioned against the crazy trainwreck that was the Richmond Chase Play-In race, which may have held down the short track crowd a bit), lined up a babysitter for Baby Speedgeek, packed up some seat cushions in the car and headed northward to Highland Rim Speedway ("Tennessee's Family Action Track"!).

The Mrs. and I have done the short track thing several times in the past, mainly to Eagle Raceway ("America's Home Track"! Related: I think every short track in America has a tagline like that...) near where we lived in Nebraska, but we'd yet to sample Tennessee short track racing. Also, while The Mrs. has seen dirt track racing, sports cars at Mid-Ohio and the 2006 Indy 500 (don't even ask her about it...she just remembers that it was hot and that she hated basically everything about it, including the crowds, the walking, the drunk people, the fact that she couldn't tell what was going on after about lap 20, the overwhelming noise under the Turn 1 overhang, and the fact that it felt like the surface of the sun even in the shade. Did I mention that it was a bit warm that day?), she'd never been to a short paved oval. Oh, and Little Speedgeek was going to experience her first race that did not involve Hot Wheels or animated characters. This was going to be a big night for everybody.

The drive up was ridiculously easy, even with a bit of downtown Nashville construction. Even cruising into the parking lot right at 6:00 on the nose, we parked no more than 80 feet from the ticket gate, and hopped out of the car just as the National Anthem was being sung. Oops. I'd hoped to get there about 10 minutes earlier, in order to have a few minutes to size up the grandstand layout and let Little Speedgeek take in the scene before the chaos of cars circulating at high speed took over. Oh, well. As it turned out, I had little to worry about, as there was only one solitary non-smoking grandstand down toward Turn 1 (Me: "Where do you want to sit? Wanna sit in turn 4? That looks like a good view." Mrs. Speedgeek: "No. We are sitting in non-smoking." Me [remembering that I have a child in tow for the first time]: "Ah. Right."), and the program was running a few minutes behind schedule.

We had just enough time to send Mrs. Speedgeek to the concession stand for Round 1 of the evening's dinner (plain hot dog for the Little one, burger for the Mrs., nachos for us to split while I pondered my entree) and get situated to scan where we were. It was...probably a little overwhelming... 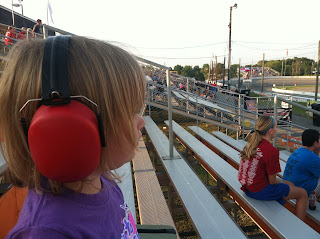 ...but after a few minutes, the Dwarf cars had been started, and we were on our way with the first heat race. Were we excited? 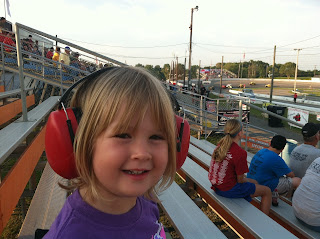 Yes. Yes we were. Now, I'm not going to try to pretend that the Little one hung in there right through the end of the Feature races, or that she was riveted to every last widening or narrowing gap between cars (I took one or two half-hearted stabs at pointing out cars that were attempting passes, but knew right away that any concept higher than "flag man waves the green flag, cars go fast for a while, flag man waves the checkered flag, race is over" was going to go over her head), but she did pay attention pretty well through the Dwarf and Rim Runner heats: 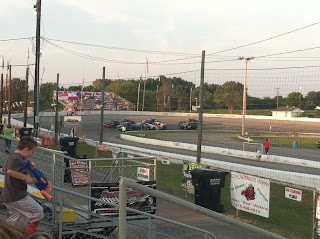 (Rim Runners being totally gutted out and beaten up but otherwise pretty stock looking Dodge Neons, Nissan Sentras, Ford Escorts and the like, which put on a decent show on a paved, high-banked quarter mile...oh, plus there was a near fisticuffs after the race after some David Hobbs-esque "argy-bargy"). After that? It was a few isolated moments of cheering on random cars that she picked with the help of her pink pom-poms that she brought along, some asking what I was eating ("a giant plate of chopped pork, beans and potato salad, sweetie." "WHAT???" "NEVER MIND!"), and asking if she could go bounce in the bounce house we saw just inside the gate.

Whoever first thought to set up a bounce house and an inflatable slide at a short track is a genius. 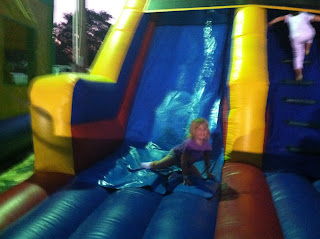 It's like a license to print money. And it'll buy any parent an extra couple of heats or even a whole Feature, if you time your visit right. And to reinforce how family friendly Highland Rim is, there is one of these about every 20 feet along the fence: 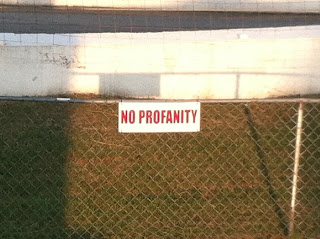 Seriously, don't even think about dropping an F-bomb. Greenbrier's Finest will escort you out. Or maybe politely ask you to pipe down. I don't know, because I heard nary a "dagnab" all night.

We did stay in our seats through the remaining heats (Super Stocks and Pure Stocks, I think...) until the intermission before the Features, then figured we'd give her the aforementioned bounce house respite. After that, the plan was to get through as much of the Tuner Feature as possible before the inevitable boredom- and fatigue-induced meltdown while sampling some fried Nutter Butters for dessert. Unfortunately, there was a slip on some gravel under the grandstand, causing a boredom-, fatigue- and scraped knee-induced meltdown. The Nutter Butters would have to be "to go", but we'll be back. 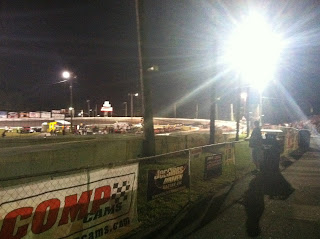 The racing was too good, the track food too tasty, and we had waaaaaaaayyyyy too good of a time for there NOT to be a return visit. 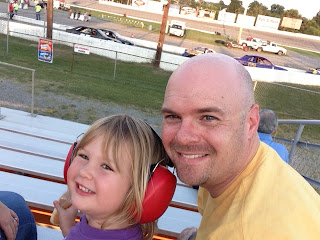 Nice work! Hope she picks up the racing bug.

And always good to check out a track new to you.