Is a postseason win really an "upset"? 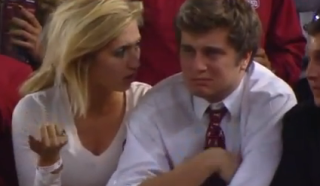 I am ready for the big Auburn upset tonight! Wait… what?

This notion of having an "upset" win in the postseason seems kind of dated to me. These days, teams are mostly competing on level playing fields within their respective leagues. So when two teams meet in a playoff matchup, they have both essentially accomplished the same thing throughout the season. So why would it be so surprising for one team to beat another?

Even the gambling lines are guesses, sometimes not very good ones either. Let's start with the NFL and look at the Bengals and Chargers game from yesterday, for example. I haven't checked sports lines since I stopped reading the newspaper every day (sometime around 2007), so I had to do some digging. I had no idea that Cincinnati was something like a seven-point favorite. I watched a few Bengals games this year, and I watched several Chargers games. To me, either team could've won, and I expected a good game. However, there was nothing surprising about the way things unfolded, leading to an Andy Dalton meltdown and a big San Diego road win.

I know home field means a lot. I get it. Yes, I wish my Saints had done a better job and forced the NFC road to come through New Orleans. Yes I hated the idea of my team playing in the cold weather in Philly on Saturday night. But was that an "upset" win in any way? Are you telling me that you (or anyone else) were convinced that the Philadelphia Eagles were clearly the better team?

I guess first you have to learn to trust your eyes. I watch a lot of NFL football, and obviously I haven't missed a Saints game in many years. So while the media fed everyone the idea that New Orleans was absolutely terrible on the road (3-5), real fans knew better. Did we have three terrible road performances this season? YES. But think of this: If Tom Brady and Cam Newton do not both complete their final passes against the Saints for comeback wins, the media would today be speaking about a 13-3 New Orleans team with a winning road record. It didn't happen that way, which is why we got the sixth seed that we deserved. But use your eyes. Losing on the final plays to two great teams does not make the Saints a bad road team.

So while road losses to St. Louis and the New York Jets are inexcusable, most NFL teams have head-shaking moments at some point each year. So then what about the fifth road loss, the awful display in Seattle just a little more than a month ago? That is the one everyone will point to this week, and rightfully so. Furthermore, Seattle has been a consistently better football team this season, meaning even if the game were in New Orleans, there is a good chance my team's season would be still be ending on Saturday night. But what if we go into Seattle and WIN? Is that really an "upset"? I feel like the team with Sean Payton and Drew Brees can never really be considered a sure underdog.

At this point in the year, specifically the postseason, throw the records out. It only takes one performance on one day. The San Francisco 49ers were favored over the Green Bay Packers by three points yesterday. So for the Packers to win with Aaron Rodgers back at quarterback at Lambeau Field in freezing temperatures against the team from California… that would've been an "upset"?

I think we're just using the word in the wrong context really. To me, a true upset would be something happening despite the sides being obviously uneven. When the Oakland A's were making the postseason over all the teams with much higher payrolls, that was more of an "upset" to me. Once the playoffs start though, why would we be so shocked if a certain team wins?

The word might be acceptable during March Madness, like if some 12-21 Northeastern Michigan with a 16 seed knocks off Kentucky. But a 10-seed from the Big Ten knocking off a 7-seed from the ACC? An "upset"? That's absurd. And college bowl games today are basically creating the most even matchups possible and playing the games on neutral fields!

So again, using my eyes and my brain, there is no way I could predict the outcome of tonight's National Championship Game between Florida State and Auburn. I'll be cheering for Auburn, and I absolutely had to look up the line to discover that Florida State was favored by more than TEN POINTS. Maybe it will be a blowout. I don't know. But I watched a lot of Auburn games this year, and all they did was win. (Except against my LSU Tigers, of course!) So why would would anyone be so shocked if they won again tonight?

In most of today's leagues, there are very few postseason scenarios that should prompt us to use the word "upset."

Well, I think the real premise of all upsets is gambling, or more specifically gambling lines. As long as there are betting odds you will always have upsets and people’s fascination with them. I wouldn’t say Gambling Lines are guesses, they are actually very scientific, but not based on guessing scores or winners. You have to remember ALL gambling lines serve the single purpose of splitting the bettors.

The issue as you point out, is betting has ruined the definition of “upset” or “underdog.” I always hear people talk about the dogs covering or winning outright, but you can be an underdog at -1 point.

Basically the gambling line’s purpose is to make sure a Casino doesn’t go bankrupt because everyone bet on X or Y team, they create the lines to split everyone. In essence, the betting lines are a fairly accurate judge of public opinion.

That being said, I completely agree with you that in the NFL there are no playoff upsets. The worst playoff odds I’ve ever seen were 11 point underdogs or something like that. That’s not an upset, and upset comes from 30 point underdogs.

However I would disagree with you that ALL playoff teams are created equal, and that none have upsets; because not all contenders have the same resumes. There’s a lot of concession participants in playoffs, especially in March Madness. Remember 7-9 Seattle getting into the playoffs while there were 12-4 teams also getting in? I’d say its far to claim they both did the same thing to get into the playoffs. When it comes to NCAA its even more disparate because no 2 teams have the same requirements, some play in vastly tougher leagues.

In fact its that disparity that made the New Orleans and San Francisco wins even less upset-y. Both of those teams had vastly superior in-season records than the home opponents. I remember one year in MLB a team made the playoffs 1 game over .500.

In racing I would say upsets are really only over the course of a season, I think any fan knows its always possible for any car to win any single race due to wrecks and such, but that doesn’t stop Vegas from putting 150-1 odd on them winning.

As far as the media build up, they just need eyeballs, I think they were more sticking to the Saints as a franchise were 0-5 on the road in the playoffs, that was the more telling statistic, just like the Chiefs and Bengals are generally terrible in the playoffs.

Right, everything you're saying about bettors is obviously true. So I guess I'm separating the two, and I'm kind of saying you have to be one or the other. If you're a fan of college football, as opposed to someone who views it as a means of making money via gambling, then you really should not expect Auburn to be rolling over and blown away by double digits tonight. Sure it could happen. But they could also win by double digits, I believe.

Yes, the lines are scientific and a lot of research goes into it. But once the teams take the field, like Bengals/Chargers, it can can be as simple as momentum, rain, and a young QB who has yet to do anything significant in the postseason.

As for the Saints statistic, it's pretty silly. First of all, we won a Super Bowl outside of the Superdome. So we HAVE won a playoff game, even if that is only counted as a neutral field. Whatever. It's misleading at best. Furthermore, throw in that whatever happened before Payton-Brees arrived is completely insignificant. I'd even argue that the road losses under Payton before this year don't matter. The losses in Seattle and Carolina last month should mean more than a loss from the 2011 season, right?

Bottom line is that my stance was supported this weekend, when three road teams won, as the one home team winner needed one of the largest comebacks in league history. Kansas City's stubbornness, repeatedly throwing the ball instead of shortening the game, had more to do with the Colts win than any history, previous statistic, or betting line.

Yes, teams make the playoffs with sub-par records. (And the NBA first round kinda doesn't count since half the teams get in.) But why? Green Bay was 8-7-1 going into yesterday. But how many games did Aaron Rodgers miss? If a team is healthy in the postseason, the season record doesn't mean so much. If Drew Brees is out for the year, then yes, a 20-point line in Seattle this weekend would make sense. But a healthy Saints team against a healthy Seahawks team? As NFL fans, we have to believe that's technically anyone's game. Seattle has the edge, but like you said, we aren't talking about a 30-point favorite here.

I was probably too general overall, but it was more like saying we should just be fans and be glad we have such even matchups so consistently.