Text messages from the Pro Bowl 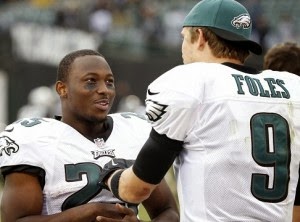 So with the new Pro Bowl format, teams are no longer locked into the standard NFC vs. AFC sides. Instead, we had Jerry Rice and Deion Sanders drafting players from the available pool, like two captains choosing sides in gym class dodgeball. Of course, this now allows for some awkward situations where teammates can find themselves on opposing sides.

On a related note, Grab Bag Sports was fortunate enough to secure a text exchange that took place tonight between Philadelphia Eagles stars Nick Foles and LeSean McCoy. I think it's safe to assume that Foles would prefer the old Pro Bowl system!

McCoy: Who is this?

Foles: Not much. Just got done practicing.

Foles: Oh, it's cool. I'll just hit the IHOP or something.

Foles: I thought I was your quarterback?

McCoy: No, you are. You totally are! But I mean, for the Pro Bowl. You know?

McCoy: Drew just wants to run through plays or whatever. He's a cool guy, and he's very focused on the game.

McCoy: I'd ask him if you could come hang with us, but you know… you're on the other team.

McCoy: Maybe after the game we all hang out together. :)

McCoy: Don't you have plays to go over with your players?

Foles: I'm running with the third team. I haven't even gotten a uniform yet. Guess I'm not as good as Drew. Your new quarterback. :(

McCoy: Come on man! You're totally just as good as he is.

Foles: Yeah right, that's why they beat us at home in the playoffs.

McCoy: They did, that's true. But you're young still. Next year will be our year!

Foles: You think so? Really??

McCoy: Hey man, I gotta run. Jimmy just got here with the pizza! I need to grab some, or he might "dunk" it all into his mouth. LOL.

Foles: Have fun with your new friends.
Posted by Mike at 8:34 PM