So earlier you saw our first installment of sports sharing universally saying there should be no allotment of players for singular plays. But recently in a few text messages and emails Mike and I exchanged some of the things that tennis simply gets right and everyone else should do.

#1 - Your challenges allowed is simply counted by how many times you are able to be wrong and only players get to make them.
It makes no sense in the NFL that you have a limit on challenges even if you are right all the time. Baseball only lets umpires make calls and its the same in the NHL. Why not let the players make a challenge and forget the coaches, because at heart its the players contesting the battle.

Its simple really, if players don't see the point in making challenges, then it doesn't need to be made. In football ALL the time coaches challenge even though they know they are wrong because they want an extended timeout, or because they have multiple challenges to blow. Just change it to "you only get to be wrong once and you're out of challenges"

#2 - Replays should not be done by humans, at the very least it should not be done by a single person on the field.
Seriously we have so much damn technology; and we refuse to use it. In tennis a challenge takes upwards of 20 seconds. In the NFL it takes 5-10 minutes and in the few instances of baseball that has been done to date it's taken 15-20 minutes.

Technology can easily see if a football crossed the line or hit the ground of if a soccer ball or hockey puck crossed into the goal, it makes no sense we let a human look at a TV screen and make an objective call if they could "see" it crossing. So many calls in the NFL are not overturned because there isn't enough evidence; that's insane in this day of technology.

More to the point everyone on the field has a bias, the Ref doesn't want to look like they made a bad call, and all the participants want things to go their way. If technology can't be used, leave it up to a professional call reviewer who should make the call in 2 minutes or less and be done with it; at the end of the day its sports, not a trial by jury. 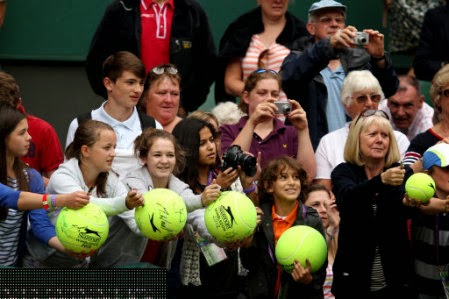 #3 Giant Souvenirs!!!
Ok I'm mostly joking but have you guys seen the ridiculous giant tennis balls that kids in the stands get autographed by the players!? Obviously its a souvenir-only ploy but it should be done by all sports, gigantic footballs and hockey pucks, gigantic shoes for track athletes and gigantic hockey sticks, and best of all, real life size model cars, not real cars giant models with no engine.

#4 Quick Interview to the Crowd After a Match and Then Souvenirs up to the Nose Bleeds
This one is for the fans, they shelled out a ton of money to go and for the folks way up top they don't get to see as well, sometimes have to deal with weather and get no chance at an autograph. In tennis though after a match they interview the players for everyone to hear rather than having them just run back into a tunnel. Then after the interviews they autograph some tennis balls and hit them up into the high stands for the fans. This is a great practice and is a way to make the blue collar fans happy and give them a chance to take an autograph home.

#5 Lastly and this isn't just tennis that does this... All decisions made about how the sport is conducted is done with priority of the game and the fans at the stadium/track/field FIRST!
Too many leagues are doing TV timeouts, angle adjustments and such for the viewers at home and its starting to hurt the sports. The NFL could barely sell out 3 playoff games and the Super bowl secondary market prices are at an all time low because being at home in comfort far outweighs being at the game. the same goes for many sports because we've actually changed the games enough that you're actually at a disadvantage being there. So bad TV timeouts, and ban extending yellow flags at races to match the Tv window, you're compromising the integrity of sports.
Posted by Allen Wedge at 1:20 PM