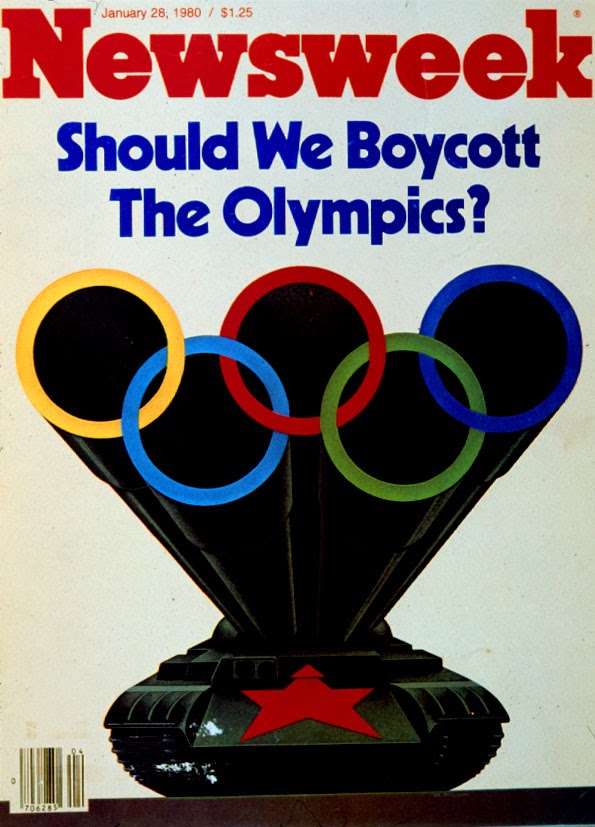 I keep hearing this. From people on my Facebook feed, various blogs and sites, and random people in public. They want to boycott! They want to tell our athletes who have worked each day for four years that they cannot go compete in the Sochi Winter Olympics.

I think if you're one of the people saying this, you were probably also the kid organizing the petition to get the teacher fired, right? You know. The teacher gave a test, everyone failed, and someone's approaching the principal's office with 17 signatures on a sheet of looseleaf. But that's what kids do. Instead of talking about issues, working out problems, and reaching some form of appropriate compromise, they resort to immature plans like this.

Also similar is the teenager quitting his job. Your boss at McDonald's wouldn't give you a cigarette break, so you threw your apron on the counter and "walked out." Of course, McDonald's didn't close because you quit, not even for five minutes. The company didn't lose one penny and, in fact, saved the $27 they would've paid you for the rest of your shift. And the dudes you joked around with at work every night? They couldn't even remember your name within 48 hours.

Neither of these scenarios ever accomplished anything, but we all knew kids who did them consistently. So let me ask you: What did the 1980 boycott accomplish? Aren't we back in Russia 34 years later, awkwardly threatening (if these critics had their say) to do the same thing? Are we still talking about how much we let our athletes down that year? (Hint: The answer is yes.)

I hate arguing politics, and I don't want to be preachy, but surely most people have to buy into the idea of reflecting on history and learning from past successes and failures. Right? Then why am I still seeing blogs like this one saying things like this:

"Besides the alarming problems on the women's downhill skiing and men's slopestyle snowboarding courses, threats of avalanches and potential terrorism and widespread complaints from journalists about dubious plumbing, the political and moral underpinnings of the games are falling apart."


When I read and hear you post and say things like that, I have no choice but to believe one of the following is true:

1. You are truly sincere in your efforts and are just misguided.

Maybe you really believe you will make a difference. I don't know, but I'm willing to give some of you the benefit of the doubt. Just do yourself a favor and research past boycotts. I think you'll find that continued dialogue and respectful compromise can usually be just as effective. Also, realize that "sticking to your guns" means that hundreds of athletes do not get a chance to compete at the Olympic level, something many of these Americans have dreamed of accomplishing for years.

Similar to number one, except here your efforts aren't sincere at all. You just want what you want, and you don't care who else is affected. Maybe you have a gay friend, so you're going to show everyone just how much you believe in gay rights. Maybe you hate Obama and just want to criticize anything and everything that takes place during his terms. I don't know. But some of you sound like you only have your own interests in mind when you say these things. Just imagine that some day, your son or daughter may be on his or her way to the Olympics, and there will be a group of people attempting to minimize this achievement due to some political agenda.

See, I believe that we should mainly focus on getting things correct here in America before we go fixing everyone else. You know, America. Where we live. Where it may soon be legal to buy marijuana in more states than it is to have a gay marriage. Our country isn't even on the same page, yet you want to "fix" other countries.

Did you see your Facebook feed during the Super Bowl Coca Cola commercial? "A gay couple!" "Those people are singing OUR song!" Yeah, we really need to focus on Russia right now.

What about all of the racism that still exists? What the homeless people sleeping on the streets this winter? Healthcare? Education?

In the end, we're talking about people competing in sports. There are much larger issues to address here at home before I'm ever going to worry about correcting another nation's problems in relation to the Olympics.

Did you watch the interview Bob Costas did with the President last night? There's a working relationship between the two leaders. I think that's actually pretty positive. It isn't really our job to correct everything.

And finally, I'm so sick of all the Americans talking about the awful hotel situation. If you aren't in Russia this week, I don't want to hear you comment on the plumbing in Sochi! Just shut up about it already.

Look, I get it. Doing the Olympics is hard! Like many people, I'm just your average baseball- and football-loving American. I might be able to name 15 Sochi athletes total as we just get going here. And there is just so much other stuff going on, right?

In 1992, I remember the Red, White, and Blue pay-per-view channels. We didn't pay for it, but I listened to the Dream Team's games on these channels, trying to figure out which of the scrambled video images were Michael Jordan.

Now we have it all at our fingertips. Television coverage of some kind will be available at almost every hour, day or night. Live streams of most sports can be found on our computers, phones, and other devices. (I'm watching live speed skating right now as I type at 7:00 a.m.) And yet many of us will not watch one second of this year's games.

Where do we start? Who are the big names? Which are the best sports? It's a lot to dive into. But it's really fun.

Just this week, I learned so much. On Tuesday, I did a couple of hours of research and setup the Live NBC Sports app on my phone before recording our preview podcast with Wedge that night. I don't really know much, but the podcast gave me a chance to at least discuss some things with Allen and to learn a bunch as we talked.

On Wednesday I spent 45 minutes making a TV schedule for myself, using the Central time zone, and noting all Olympic programming on the five channels offering coverage (NBC, NBC Sports, MSNBC, USA, CNBC). My kids have already gone through it and marked some things they would like to watch, and they have the exact time and channel listed for them right there by the TV.

We watched as much of the NBC coverage as we could this week, we read a little bit about Russia, and my wife planned a few "Russian" meals to cook during the Olympics. My kids are learning a little bit and are having some fun.


To me, the most telling sign of freedom is that we can allow our athletes to make their own decisions. Even if we disagree with the way things are in other countries, our athletes are ultimately free, and we aren't going to stop them from following their dreams. They've trained for years and have decided to compete in these games. For two weeks we can watch, we can support them, and we can have fun along the way.

(Check out this post from the Tipsy Geekette blog for more sane reasoning.)
Posted by Mike at 8:37 AM

Spot on though I really think you missed #5 You're an idiot. I'm serious, I really think the large majority saying things like this are just dumb and either don't know many, if any, facts surrounding the Olympics, or weren't going to even watch anyway.

And terrorism!? I'm pretty sure no one in the United States is ever allowed to say a damn thing about that considering it was OUR Olympics that had a bomb go off in the Olympic park killing 2 people and badly injuring hundreds, and then we even boggled the aftermath destroying a guys life when he was actually the hero who saved many lives.

I really think the biggest strength of the internet is also the biggest downfall, anyone is allowed to post anything.

Ha, I obviously agree and am glad you posted it. I was trying to be nice and give people credit. But you're absolutely right. One facebook conversation last night literally began with: "Shouldn't we boycotting the Olympics or something?"

Not watching on TV seems like a pretty pointless gesture. And insisting that not send our athletes would accomplish, what, exactly? Did anything change after Moscow in 1980? I think not.