Is Jeff Samardzija pitching his way out of Chicago?

Earlier this season, Milwaukee Brewers pitcher Matt Garza told Chicago Cubs ace Jeff Samardzija to pitch his way out of Chicago. Garza, who played for the Cubs the last three seasons, has also trashed the organization in a few different interviews. As a Cubs fan, I do believe Garza has a point. Looking back, I certainly wish that we had used Edwin Jackson's money to sign Garza instead (assuming that money was going to be spent, as opposed to saving it or investing further in development). His Brewers are in first place, 11.5 games ahead of the Cubs. And, yes, I also love watching Samardzija pitch and all that he brings to the team.

That being said, I would still like to see Samardzija "pitch his way out" of Chicago at some point over the next five or six weeks, because it will undoubtedly mean another great return for Theo Epstein, Jed Hoyer, and the Cubs organization.

The haul that the Cubs got in return for trading Garza last season is rapidly making the deal work out in Chicago's favor, even with C.J. Edwards, potentially the trade's best player, sitting on the injured list for AA Tennessee. Consider the following:


Seriously. This is what the Cubs managed to get for giving up two months of Matt Garza, who made just 60 starts during his time in Chicago, compared to 94 in the previous three seasons for Tampa Bay. (Adding the 13 starts with Texas at the end of last season still puts him more than 20 below what he was able to do with the Rays over the same amount of time.) Yes, when Garza was healthy enough to pitch for the Cubs, he was pretty good. But we fans do not miss his horrid fielding abilities, his terrible attitude, or his trips to the DL. (As for being just generally weird, I was totally OK with that. I liked Garza a lot when he was healthy and keeping his mouth closed.)

Honestly, right now Samardzija is better than Garza. And with an extra year of team control on his contract, Cubs fans remember the Garza deal and are hoping for a similar (if not better) return when Samardzija is traded.

Samardzija is not interested in any kind of extension, and he really wants to hit the free agent market. So why waste a great trade chip on this Cubs roster? And even if he would consider an extension right now to avoid a trade, think about the money it would take. At least, what, $18-20 million per season? So with a four- or five-year extension, how many seasons will be wasted waiting for the prospects to reach the majors and help the team compete? Even if the answer is only two (which I doubt), that's $40 million that could be saved and spent later on top talent anyway. If the team is ready to compete in 2016, spend the money then.

The current front office has been solid in almost all of its moves. The Edwin Jackson contract kills me, but that's really the only thing I can question. No one could've predicted the Kyuji Fujikawa injury, while many other free agent deals have worked out tremendously. Paul Maholm brought back prospect Arodys Vizcaino, who is now healthy and rising through the minors. Scott Feldman was flipped for Jake Arrieta and Pedro Strop. And now Hammel is sure to demand at least a prospect or two.

Still, a Samardzija deal could be the biggest one yet. And since this team is not ready to compete yet, as a Cubs fan, I'm hoping he does "pitch his way out."
Posted by Mike at 4:21 PM No comments:

Both were available at today's Porter Flea in Nashville. The card was courtesy of Mitchell Bat Company. The beer is from our local Jackalope Brewery. Both are awesome. 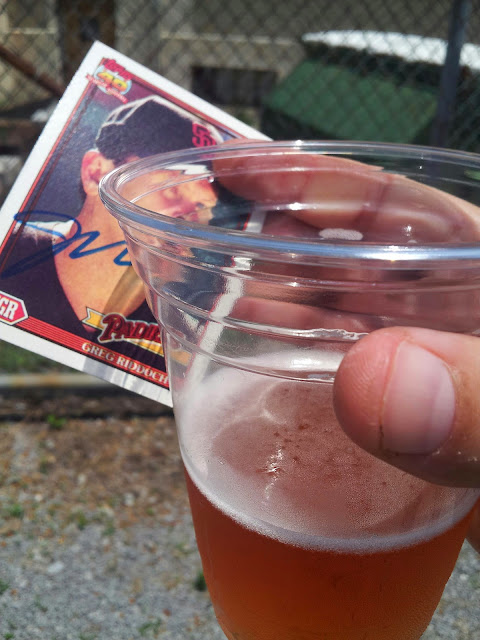