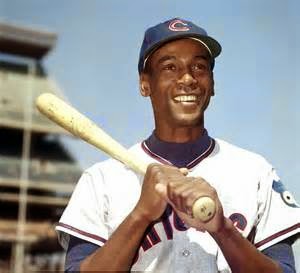 As we rapidly approach Blogathon, I wanted to take five minutes to honor Ernie Banks. As a lifelong Cubs fan, this one hit me hard last night. Perhaps at some other point before the season starts, I can post a better kind of tribute, but for now I’ll say a couple of things.

First of all, when I was young, like 10 years old, I used to listen to a New Orleans radio talk show with my grandmother. The show ran all night long, and I’d stay up as late as I could when I slept by her house. Topics discussed were different each night, and regular callers were all given nicknames. I’d call in from time to time and would always want to talk about baseball. So when it was time to get my nickname, since the Cubs were my favorite team, I was named Mr. Cub. It was such an honor for me, as a kid, to share Ernie’s nickname, even on such a small scale.

The other immediate thought I have is that I will never forget walking into my dorm room one day in 1998. My roommate (Wedge’s brother) told me Harry Caray had died. The Cubs were coming off of a 1997 season where they finished with 68 wins and looked absolutely terrible. Still, I just sat down and said, “Well, we have to make the playoffs this year.” Of course, the 1998 season was magical (although somewhat steroid-inspired, I guess), and Harry was consistently honored throughout the season and beyond. I am looking forward to 2015 even more now, hoping my kids will get to watch some great baseball and also learn about one of my heroes.