Rob Manfred, baseball's new commissioner, is ready to get going, and he's looking to fix some problems. In fact, there is one issue that he is already discussing, saying he's going to try to make a change. Is it the awkward Pete Rose situation? No. Is it the unfortunate occurrence of steroid era that is now keeping some of the game's greatest stars out of the Hall of Fame and alienating them from their former teams, even without proof of guilt? Nope.

Now, I don't really like defensive shifts, and I would never use them if I were a coach. I'll also say, though, that I'm obviously not a coach, nor have I carefully studied numbers and statistics based on shifts against certain players. So if/when my team happens to shift, I trust that there is statistical evidence supporting it. But ultimately, I'd rather not see it.

Still, just because I do not like it, that doesn't mean I want it banned. This is one of those very slippery slopes. Could you ban a 4-3 defense in football? Nickel or dime packages? What about a wildcat or option offense? When did the leagues start telling teams what kind of defensive alignment they were allowed to use? 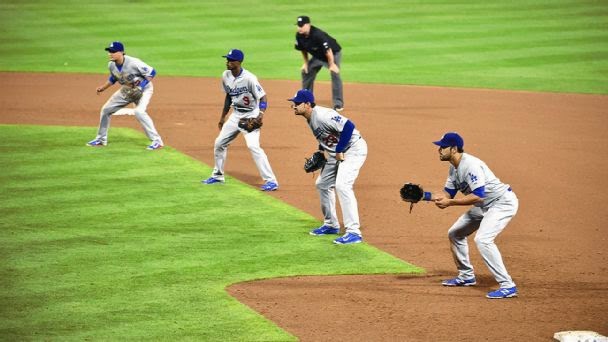 Let's try some baseball comparisons. Can the third baseman or first baseman still play in closer during a bunt situation? Can a center fielder or middle infielder shade to one side or the other? These are technically "shifts" of some kind.

I don't like the shift, but it is within a coach's rights, just like batting the pitcher 8th or using the DH position to replace a fielder's bat instead of a pitcher's. (I actually argued for this during interleague play last year, when the Cubs would DH for Travis Wood while allowing Darwin Barney to waste another four at-bats. Wood finished 2014 with a .700 OPS, compared to Barney's .594 during his final Cubs season.)

Sometimes the manager needs to be able to do something quirky in order to give his team a better chance to win.

But the main argument I offer to the people who want to actually ban the act of shifting is to have players learn to hit against it! And maybe they never will, like a basketball player who just can't shoot free throws well. But we don't find ways to help them avoid shooting free throws, do we? Maybe Ryan Howard just needs to practice hitting the other way more.

It's never good when these commissioners start making drastic changes. Another example of this occurred in the NFL Pro Bowl last night, when the kickers faced longer extra points (35 yards) into goalposts that were only 14 feet wide instead of 18. Of course, Adam Vinatieri missed two extra points, something that should never happen to a Pro Bowl kicker. The extra point is fine how it is. Just leave it alone.

With all this talk about pitch clocks and now banning defensive shifts, I'm kind of starting to worry. I believe the big issues need to be addressed, while the game of baseball itself is fine as it is.
Posted by Mike at 4:31 PM