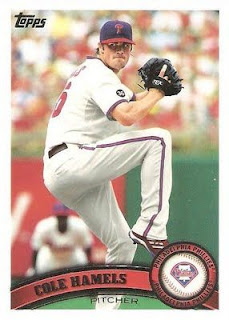 We are now in June, and as the July 31 trade deadline approaches, Cubs fans are anticipating a possible run at Phillies ace Cole Hamels. The two teams have been linked in trade rumors since last year, and now that the Cubs are competing and approaching "buyer" status for the first year in a while, a Hamels deal could finally be near.

Among fans, however, there has been much debate about what the Cubs should be willing to give up to get Hamels. Many fans believe this isn't the year for the Cubs, and instead of giving up talented prospects at the trade deadline, the team should instead land another free agent in the offseason and aim for the 2016 postseason.

I disagree. I think the time is now. I know the future is bright, and it could be that Kris Bryant, Addison Russell, Jorge Soler, and others will only get better. If so, great. I'm all for a dynasty. But as a Saints fan, I also know that dynasties don't always happen. Players may get hurt. Players may have peaked. I don't know. For whatever reason, this could be the best chance to win, and the team should approach this as such an opportunity. And I think they will.

So aside from the players currently on the major league roster, who should the Cubs consider as "untouchable"? As much as I enjoy reading about the next batch of prospects and listening to minor league games on my phone just to hear future Cubs play, I think the answer is really simple. Only Kyle Schwarber should be off limits.

Now, it could be that the Phillies say they absolutely won't make a deal without Schwarber or even Russell coming to Philadelphia. That would be fine to say, and the Cubs did land Russell by trading away their own ace in Jeff Samardzija last year. In fact, if Russell and Billy McKinney were traded for Hamels, the team essentially would just be trading Samardzija for Hamels (especially considering Jason Hammel is back in a Cubs uniform this year).

However, if the Phillies do take that stand, it would likely be a deal breaker, and they'd have to move on to another team. Russell is no longer a prospect, and Schwarber is looking every bit like the next Kris Bryant. (And admittedly, we don't really even know what that means.)

Instead let's look at a realistic package. When the Cubs traded for Matt Garza in 2010, they sent five players to the Tampa Bay Rays to get an ace pitcher with a few years of control remaining. None of the players were the team's best prospects, but a few had significant upside. In the end, the Cubs were able to get decent value for Garza themselves by trading him at the end of his contract, while the Rays emerged with Chris Archer, now a legitimate AL Cy Young candidate. Neither team should have regrets about that trade.

There should be a way the Cubs and Phillies can come to an agreement that does not include Schwarber. I am only a fan, and no matter what I say here, many will disagree with me. But I believe the following players would create a fair package to trade to Philadelphia for Cole Hamels.

TWO of the following:

1. Carl Edwards Jr. - Ranked #2 on the team's prospect list on MLB.com, Edwards is the team's best pitching prospect. It makes sense to include him in this trade. Of course, the Cubs have moved Edwards to the bullpen this year in an effort to preserve his arm and possibly to get to Chicago sooner, and he recently moved to AAA-Iowa as a reliever. Eventually, however, he'll likely be in someone's rotation (remember, Samardzija came to Chicago as a reliever), so his time in the bullpen this year shouldn't be a concern. A possible replacement here would be Duane Underwood (MLB.com Cubs prospect #6).

2. Billy McKinney - McKinney (MLB.com Cubs prospect #7) is my personal favorite behind Schwarber. He is flying through the minor leagues and is currently playing well at AA-Tennessee. He walks almost as much as he strikes out, and he has a career OBP of .373. A possible replacement here would be Albert Almora (MLB.com Cubs prospect #4), which could give the Phillies two of the top four prospects from the league's most loaded organization.

3. Dan Vogelbach - Vogelbach (MLB.com Cubs prospect #14) is crushing AA pitching this year, hitting .320 with a .436 OBP. He'll move up the team's prospect list whenever new rankings are released, maybe sliding into the top five, but as a first baseman without a second position, he'll likely be traded at some point. His career OBP is .382, while his career OPS is .865.

2. Tsuyoshi Wada OR Travis Wood - The Phillies may not want to take on the salary of either player, but if they're looking for a temporary fill-in for Hamel's rotation spot, the Cubs could give them either guy. Wood obviously has the experience, has been an All-Star in the past, and has pitched better lately since moving to the bullpen. Wada has more upside and has a career 4-4 record with a 3.07 ERA in his first 16 career starts.

In the end, if the Cubs pull off this deal, I'm sure I'll be OK with whatever the team has to give up. Adding another ace pitcher to this rotation may not stop the offense from striking out so much, but it'd definitely put the rotation near the best in the league.
Posted by Mike at 12:38 PM

Great post i must say and thanks for the information. Education is definitely a sticky subject. However, is still among the leading topics of our time. I appreciate your post and look forward to more.