Today ESPN’s Julie Foudy came out with an online rant about the shock over Brazil being upset by Australia in the Round of 16 for the Women’s World Cup.

Julie’s rant was not because she was mad about people underestimating Australia or overestimating Brazil, it was because the reality of the situation is Brazil’s high expectations come from its association to its Men’s national team; but while the expectations are equally high, the support/treatment the Women’s team gets by the fans/nation/media is vastly different.

She went beyond Brazil though and called for our globe to push faster to treat Women’s soccer properly and at least closer to equal to the men’s game.

Julie has a genuine beef, and she’s not even the only person to voice that opinion. In the UK, The Guardian’s Graham Ruthven came out today with an article scathing UK fans, corporate (non) supporters, and the BBC for basically ignoring/relegating England’s team and their matches, who play in the Round of 16 today against Norway.

I completely agree with them, the treatment of the Women’s tournament isn’t anything near what is done for the Men’s tournament; heck men’s 1st round qualifying to get in the World Cup almost gets more attention than the women’s actual tournament in most countries.

If things are going to change the most notable place has to be with FIFA, whose president infamously doesn’t even know who the players are and an organization not sending any higher ups to the Women’s tournament. But the change isn’t just for them to show up its for them to restructure their contracts for the TV partners and sponsors. The contracts should be written as package deals with requirements that the TV partners broadcast the men and women on the same channels, no more shoving women’s matches to Fox Sports 2 or BBC Three which the majority of populations don’t even know exist.

Telling FIFA to change is one thing that so little of us have control over. Where Graham Ruthven and Julie Foudy have direct control is over their employers. The Guardian for example didn’t even send a reporter to Canada to cover the tournament, and instead is using Reuters and the AP for the majority of its content.

In fact if you go to The Guardian’s main football/soccer home page, you get big headlines on the Premiere League, Champions League, Europa League quick links and then a small article on the fact that England is playing in the round of 16 today. 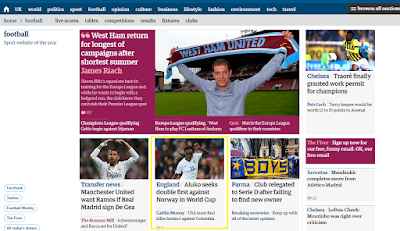 That's right, even for the Guardian, who is mad that not enough people cover/watch/support the Women's World Cup enough, even with their own country playing in the Round of 16 today isn’t as important as the fact that West Ham United is beginning to practice. Pot, kettle and all that...

Foudy should ask in a video rant, why ESPN seems hell-bent on segregating the Women’s World Cup to its own far away section of their website, structured completely different (and terribly) from the rest of the sports they cover.

If you go to espn.com right from the front page you get a selection of sports and scores in the header, and no matter what I pick (Racing, NFL, MLB, NBA, WNBA, NCAA Basketball etc.) I immediately get a sub-menu with quick links for scores, standings/tables, schedule, etc.

I have a very simple thing I want to do right now: find out when the games are tonight? Who is playing? What the bracket/standings are for the Women's World Cup? But doing so is not so easy for the Women’s World Cup.

You click that from the main menu and you are thrown to the esotericly built ESPN-W a.k.a. ESPN for Women (because nothing says inclusion like segregation and different treatment). Looking at everything above the fold for the “home” of the Women’s World Cup you can’t even find a link for scores, schedule!!! No way to quickly find important details a fan would want. 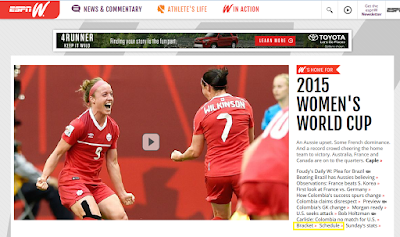 You’ll see at the very bottom in tiny text “Bracket” and “Schedule” even though the most obvious thing to splash on this screen are the latest scores and the upcoming games. If you scroll down further there’s an obtuse button for “Live Scores, Stats & Data powered by ESPNFC.”

Speaking of ESPNFC, in all fairness its worth mentioning that ESPN treats all soccer different by going to a separate website, but somewhat warranted because unlike the NFL, NHL, NBA etc. there isn’t one central sporting body that everyone follows, theres more soccer/football leagues than you could shake a stick at.

That being said, from the ESPNFC site you can pick any of the major leagues and the first thing you get are the most recent scores, and links on the primary navigation to find out upcoming matches and the current standings. 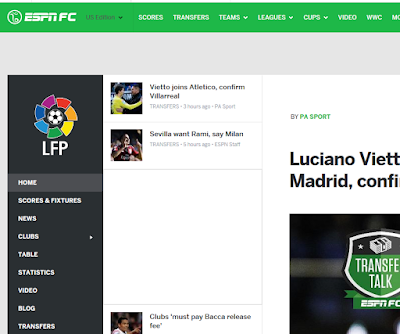 For whatever reason the number of clicks to get scores and standings for every other sport ESPN covers = 2; and those buttons are right in the main navigation. For the Women’s World Cup, its 3+ clicks plus the fact that one of those buttons requires you to scroll down below the fold to find, and even then its not simply named “scores, schedule and standings” like a normal person would call it, they call it “scores, stats and data” which sounds like fantasy sports if anything...

We can all agree that the globe has some work to do to recognize Women’s soccer for the great sporting competition it is, but everyone has to do their part, even the media covering it.
Posted by Allen Wedge at 12:07 PM