So the IOC announced today/this weekend that they have officially puled parallel snowboarding from the Winter Olympics. This means Sochi is the only Olympics that will ever have the event since that was the first time for it.

In addition to that they have added events/disciplines in 4 other sports to bring the grand total of medal events for the Winter Olympics to 102, the first time its ever reached the triple digit mark. For reference, the 2002 Salt Lake City Olympics had 80 medal events, the 1980 Winter Olympics in Lake Placid had 38 medal events; while the Summer Olympics (which has to remove sports because it has so many) had 302 medal events in London 2012.

That last part is what this is really about. The Winter Olympics just pales in comparison to the Summer games. Summer Olympic competition has recently kicked out baseball, softball, polo, windsurfing and even bowling (yes bowling was in the 1988 Olympics). It has a problem making room for old sports that have always wanted in (Rugby and Golf) and has plenty newer sports that deserve to be in (rock climbing, cricket, roller sports).

The problem for the Winter Olympics is that even the 4 new events they added are just variations/disciplines of existing sports. Mixed curling, mixed/team skiing, Snowboard Big Air, and speed skating "mass start." I'm ready to officially dub this GBS' favorite sport of the 2018 Olympics. 30+ people skating around the long track a the same time = awesome:

Big air of course will add excitement and big moments, while mixed team skiing will break up the monotony of 1 person at a time that happens in almost all winter Olympic sports. I'm not sure what co-ed curling adds, but hey GBS will never complain about sports being added to the Olympics, especially when its not a judged event. But even now these 4 additions are still disciplines, and Winter need new sports, not just new events at the same facilities; so here are our submissions to the IOC, and these are REAL submissions, these sports have official sanctions and competitions already around the globe.

Its a newer sport but not newer than many of the other XGames based sports the Olympics has been adding. Its a simple concept to watch and understand and it translates amazingly on TV. Downhill racing on skates while wearing hockey style pads. There's plenty bumping and action in the course and its already got a huge following; not to mention bidding cities could have an amazing time building the courses in historic downtown areas.

This was actually part of the 1932 Olympics but did not become an official permanent event. It should, its got history in many countries and is regularly contested around the world, including the internationally known marquee event in the Iditarod. Now some people would point to the dogs being the participants rather than the human athlete, and I would find it hard to disagree... but so long as Equestrian is in the Summer Olympics that door is open by the IOC.

Plus could you imagine the cute huskies being part of the opening ceremony?

#3 Yukigassen
A.K.A. Snow Ball Fights. Yukigassen is such a no brainer, everyone around the world understands the basic concept, and more importantly it is an official sanctioned sport with national and regional championships contested annually and a World Championship contested in Japan most recently and has some pretty major sponsorships.


The official sport consists of two 7-person teams in a single match, and an Olympic tournament would be handled bracket style like all other team sports. The first ever official tournament goes back to 1989, close to 3 decades, its not new, and it would be gold on TV as its basically like capture the flag, a concept every young person in the world knows due to multiplayer video games like Call of Duty etc. 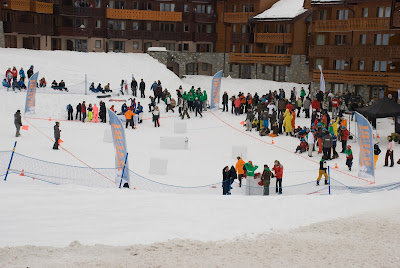 What do you think, do you have any sports you'd like to submit for the Winter Olympics?
Posted by Allen Wedge at 5:26 PM