Justin Wilson: A Fandom (From Afar) 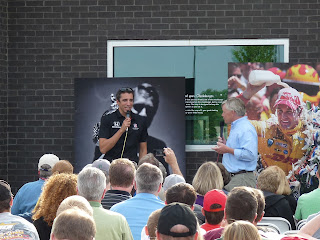 An admission right up front: I never met Justin Wilson. That is a somewhat guilty admission, because over the course of the last few days, I've read dozens of accounts of people who either knew the late Justin Wilson, ran into him somewhere or went to seek him out to talk to him face to face. Whatever the case, the accounts have been unanimous: Justin Wilson always had time to talk...to everybody. It apparently didn't matter who you were, Justin had a smile for you and was happy to talk to anybody who wanted to talk to him.

While I only managed to see Justin in passing in various paddocks (here's where I tell everybody within eyeshot of this site that a paddock pass is the best possible $50 or so you can spend on a racing weekend) and at a couple of Carb Night Burger Bashes in Indianapolis, I have been a Justin Wilson Fan for years. Many years. I'm certain that I first heard his name in connection with the Formula Palmer Audi series back in the late-'90s, probably through write ups in On Track magazine or on a couple of the budding racing news websites of the time. The details of that initial FPA season are somewhat buried in a back corner of the internet now, but I distinctly remember Justin absolutely rolling his competition in 1998, to the point that it was fairly obvious that he'd be a force as he moved up the European open wheel ladder. His first season in Formula 3000 (the forerunner to today's GP2 series), I remember being a somewhat rough one (again, mostly through accounts in On Track, since there was no TV coverage of F3000 in the US, and YouTube was still years away), but with occasional flashes of speed (his results show two top-6s, both in the first three races, before retirements in five of the last six races). The next year was better, with a couple of podiums and a fifth place in the championship while running for the front line Nordic Racing team. His third year in F3000 had Nordic running distinctive (and beautiful) Coca-Cola colors (at least they looked beautiful in the extremely occasional color shots I saw in On Track), and Justin dominating the championship (he finished off of the podium only twice and scored almost as many points as second place Mark Webber and third place Tomas Enge...combined). This guy was going places, and I couldn't wait to see what he could do in Formula 1, as in my ten years of following racing, I hadn't seen somebody dominate a junior formula quite so thoroughly. And if a guy with that much obvious talent was headed to F1, then I was signing up as a Fan. Better to get in on the ground floor, before everybody in your apartment building would claim that they were fans, too, right (even though the only people in the entire building who watched F1 were probably me and my roommate)?

But this is where Justin's 6' 4" frame got in the way: nobody in F1 wanted to try to wedge the guy into a car. He got a couple tests, but it seemed the teams didn't want to compromise the packaging of their cars for a driver who was some 7-8 inches taller than most drivers in the sport. Justin fell off of my radar a bit in 2002, as the World Series by Nissan was barely covered at all in the places I went for racing news (though the record books also show that he came Stateside that year to share the 6th place overall finishing car, with Christian Vann and Top Gear Stig-to-be Ben Collins). But Justin managed to gain interest from the tiny Minardi team, along with funding from a group of financial backers that he sold shares of himself to. I remember that part distinctly. I was a fan of his at the time, obviously, and heard about his raising money in a way I hadn't heard of before (this was long, long before Kickstarter, remember). I downloaded the PDF file (which took something like 15 minutes on a crappy internet connection) of the investor information packet, in the hopes that I might be able to buy in for a relatively small sum, but the roughly $800 (if memory serves me, though maybe it was $1800 or $8000, for all it mattered...I was basically broke) for a single share was just too much than this two-years-out-of-college guy could scratch up. Bummer.

Justin got his cash together, though. Bad news: the Minardi broke. All the time. And it wasn't very quick, either. Good news: Justin was fast...fast enough that when Jaguar F1 ditched Antonio Pizzonia for the last five races, they hired Justin away from Minardi. SCORE! And score Justin did, gaining a point for 8th place at the US Grand Prix at Indy (a race I'm proud to say I saw in person). It seemed like Justin was showing his mettle by getting into an unfamiliar car and going nearly as fast as his established team leader (Mark Webber, who remember, he'd dominated in F3000 just two years before).

It wasn't to be, though, as Jag F1 hit rough financial times and had to take the Red Bull-sponsored Christian Klien alongside Webber in 2004. Crud. But, wait! Justin came to the U.S. instead for 2004, and joined Eric Bachelart's small Conquest Racing squad for the Champ Car World Series. COOL! I get to watch him in person (which I did on occasion for the bulk of the next 10 years)! Justin finished 6th on debut at Long Beach and scored seven other top-8 finishes over the course of the year, finishing 11th in points. Nice. Three seasons at the better funded RuSPORT team followed, along with a 3rd, 2nd and 2nd in the points, plus four race wins. All this was during the period of total domination by Sebastien Bourdais and Newman-Haas Racing, who racked up four championships and 28 race wins in that same four year period.

In 2008, Bourdais headed back to Europe to chase his dream of racing in F1, and Newman-Haas promptly signed the obvious next quickest (though saddled with less good equipment at the time) guy: Wilson. This was it! Justin was gonna take the best car on the grid and sweep the championship...and maybe every race! He's finally gonna be a superstar! Except this was about 15 minutes before Champ Car went "BUST" and was absorbed into the IRL, where the Champ Car teams would have to use unfamiliar IRL chassis and engines. In the last race with the Champ Car Panoz DP-01 cars at Long Beach in early '08, Justin qualified comfortably on pole, but the car broke in the race while shadowing early leader Will Power. After that, Newman-Haas mostly struggled with the IRL Dallara-Honda, though Justin drove perfectly at Detroit to win the team's last race. 2008 seems to sum up Justin's career almost perfectly: toil for years, show flashes of brilliance, land in a good spot, rug gets pulled out and only those flashes of brilliance to show for it.

The following six years of 2009 through 2014 were spent with the minnows of the IndyCar world, Dale Coyne Racing and Dreyer and Reinbold Racing (with a return to DCR after two seasons at DRR). Even though that was the case, Justin seemed to drive over the level of the equipment more often than not, scoring wins for Coyne in 2009 (which I talked about on my old site) and 2012 (which came at Texas, which amused my buddy Rick and I to no end, since we always made fun of people for saying Justin was no good on ovals...but what kind of equipment was he running on those ovals?), and a couple podiums at DRR before missing the last part of 2011 with a broken back. Oh, but he did drag a Coyne car to an unreal 6th in the championship in 2013 (best non-Justin Wilson championship finish for a Coyne car in any post-merger IndyCar season: 16th by Alex Lloyd in 2010). Six years in the wilderness, a couple unlikely wins to show for it and no glimpses at championship form (though he did also race at the 24 Hours of Daytona most years, with an overall win with Michael Shank racing in 2012, which we were all pretty jacked about here).

For 2015, Justin decided to leave Coyne and hold out for a ride at a big team. I couldn't blame him one bit for that. While I wished he'd have been in a ride for every round, so that my favorite unsung hero could be around for me to cheer on week in and week out, I had my fingers crossed that he could at least get in a car for a handful of races where he could show his speed. And that's exactly what happened. Michael Andretti came calling, and put him in a car for the Indy Grand Prix (Justin qualified 18th, but missed the top-12 qualifying by just 0.15 seconds after limited testing) and the Indy 500 (Justin qualified 6th, as the fastest Honda driver, then ran in the top-10 for the bulk of the day before a bungled pit strategy gamble dropped him a lap down at the finish). The hopes after that were to get the last five races of the year (with some funding from Honda, who loved Justin's technical feedback enough that they picked him to do some pretty weird stuff for them), while impressing enough to get sponsorship for a full season in 2016. In the meantime, he did Milwaukee (qualified a credible 15th, engine blew in the race), Iowa (a relatively anonymous 18th in qualifying and 17th in the race...it happens), Mid-Ohio (finished a fantastic 2nd behind Graham Rahal after not pressing Graham TOO hard for the lead on a late race restart) and Pocono (qualified 7th and led laps while hanging around in the bottom half of the top-10 for most of the day, seemingly biding his time until a late race charge).

Enough said there. Anyone reading this either knows what happened at Pocono or can go find that info pretty readily. Suffice it to say that the dominant season for a top-line team will never come, though that is far from the worst tragedy involved here. IndyCar has lost an incredible spokesman and ambassador and worst of all, the entire Wilson family has lost their anchor. My heart is broken for all of them, and I can not imagine the unbearable pain they must be going through.

There has never been a downside to rooting for Justin Wilson these many years. Yeah, the frustration of the results that he so greatly deserved that never really came wasn't much fun, but you just never grew tired of actually rooting for him. He was universally beloved by everybody who came in contact with him. Other than one insanely comical shoving match with seemingly-two-feet-shorter Ryan Briscoe at Mid-Ohio in 2010, I don't know if anybody was ever even mad at the guy. Justin was the guy you could count on to drive a race car well in excess of what its pace should have been, but completely cleanly the whole time, basically never even brushing another car, and then that lanky guy would get out of that sub-average car at the end of the race and deliver self-deprecating quotes about how he could have done better. He drove race cars the Right Way and he had the right attitude about it. And as I told my buddy Rick via text message the morning after Justin Wilson's passing, "It always seemed like the universe was put in order when Justin did well."

The universe will forever be a little off kilter from here on out. But it was a true privilege to be a fan. Thanks for everything, Justin.
Posted by The Speedgeek at 12:58 AM